Trippy raps from the Bay and ragged beats from NJ 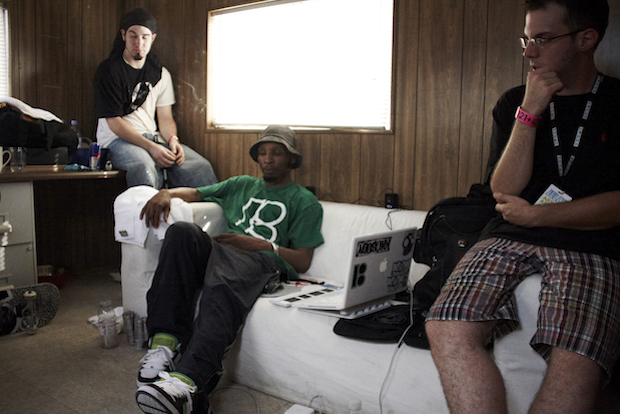 An almost ridiculously jaunty loop of orchestrated soul kicks off “On Momma’s House” from Attractive Sin, the latest from legendary West Coast weirdo Del the Funky Homosapien, with beats from the New Jersey production crew Parallel Thought. “On Momma’s House” skips and swings along for more than five minutes, with the Del doing that rapping on and on and on thing he does so well. He twirls words around, does goofy things with his voice, kind of sings, and shoots the song into a few different direction and then brings it back down to earth, all without the aid of a hook. It feels closer to the rigid experimentalism of a bebop solo than a typically tight hip-hop verse. On the next track “Ownership,” Del does it all again. Attractive Sin is a word-happy, rappin’ ass rap record with an abundance of syllables — and just as much personality.

Producers Parallel Thought, who built a reputation producing for undergrounders like C Rayz Walz and Tame One, really grabbed my attention last year with G-Side’s iSLAND, where they contributed “Cast Away” (the same drunken horn sample appears on Del’s “Different Guidelines,” here) and “Rabbits.” Those two rattling beats off iSLAND give you a hint of how Attractive Sin sounds: Trash can lid snares talking to laid-back horns and hard funk, all contorted into ill-at-ease bangers that look back to hip-hop’s halcyon sample-slicing days. Del the Funky Homosapien & Parallel Thought’s Attractive Sin is out next Tuesday, but you can stream it below, exclusively at SPIN.