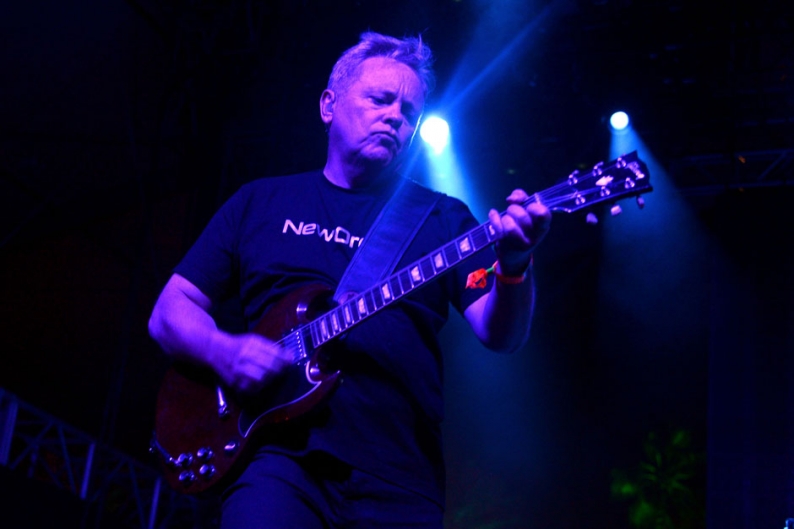 1) New Order, Live at Bestival 2012. “Live at Bestival 2012 features songs from several eras of New Order’s three-decade-plus career, and even includes a few Joy Division tunes (‘Isolation,’ ‘Transmission,’ and ‘Love Will Tear Us Apart’)… All profits will benefit the Isle of Wight Youth Trust, a charity organization that offers ‘counseling, advice, information and support services to young people aged 25 and under on [England’s] Isle of Wight.’ — SPIN (via the Guardian)

2) AraabMuzik, The Remixes, Vol. 1. “AraabMuzik has found a home in the EDM scene, where his MPC gymnastics, thundering bass drops, and squiggly noodling are among friends. On July 9 he’ll dive [in] headfirst… releasing a remix compilation of the Ultra Records roster [which includes] Bassnectar, Benny Benassi, Calvin Harris, Deadmau5, and Kaskade. He has [previously] released two songs off the album… ‘Keep It in Motion,’ a collaboration with producer Chase N. Cashe (Drake’s ‘Doin’ it Right’), is an intense drum workout. The second is a bleepy, operatic remix of Mt. Eden’s ‘Sierra Leone.'” — SPIN (via Pitchfork)

4) Speedy Ortiz, Major Arcana. “Major Arcana, out July 9, is a lot of things: awkward, vulnerable, heavy, hilarious. But above all, to use the parlance of the band’s Massachusetts home, it’s wicked smart. Guitarist and singer Sadie Dupuis is a UMass-Amherst MFA poetry student, sure, but there’s more to Speedy Ortiz than that: This solo-moniker-turned-band is like a gummy double-helix, twisting sweet-and-sour words around contorted, ’90s-inspired indie-rock.” (via NPR)

5) Snow Ghosts, A Small Murmuration. “A Small Murmuration… is as wintry as you might expect from a group called Snow Ghosts, its dark cross-hatching conjuring skies blackened by flocks of starlings, and it covers plenty of ground on its tour of the frozen wastelands: Gothic drum and bass (‘Covenant,’ featuring Blue Daisy), footworking Dead Can Dance (‘Murder Cries’), fireside deep house (‘Untangle Me’), and even unadulterated chamber folk (‘Time Listens’).” (via SPIN)

7) Vic and Gab, Love of Mine. “Vic and Gab won’t release their full-length debut album, Love of Mine, until July 9 via Blue Lola Records, but you can hear the whole thing [right now]. The Milwaukee sister duo has previously shared the winsome, emotive ‘Come and Stay’ and a sun-dappled video for the effervescent, similarly lovesick ‘Let You Down.’ The full album reveals how deeply Victoriah and Hannah Gabriela plumb their jangling, melody-oriented niche, from keyboard-anchored anthem ‘Crazy Love’ to bouncy call-to-dance ‘When You Walk in the Room.'” (via SPIN)

8) Lil Jabba, Scales. “With a series of left-of-center cassettes and Bandcamp-only releases to his name, [Lil Jabba] is dropping his first full-length album via forward-thinking U.K. imprint Local Action… and has simultaneously treated us to a full stream of its 12 tracks. The Scales LP exhibits a decidedly lo-fi take on the footwork template, with Lil Jabba packing his tracks full of intricate samples, noodling interludes, and deliriously heady beats. It’s definitely an uncanny brand of footwork, and while there’s no doubt these tracks would work on the dancefloor, it still sounds quite unlike anything we’ve heard before from the genre.” (via XLR8R)

9) Maps, Vicissitude. “James Chapman, a U.K. musician who records under the name Maps, writes earnest synth-pop songs in the tradition of The Lightning Seeds, Erasure and other artists whose use of machines is incidental compared to the pursuit of thoughtful songwriting. Chapman’s charming songs sound fizzy and bright throughout Vicissitude, Maps’ third album, but they also convey his thoughtful reflections on transition and doubt… After two albums of more outward-facing dance-pop music…Vicissitude finds Chapman sounding more fully formed as both a musician and a human being. Smart and soaring, it’s an album versatile enough for dance floors and road trips alike.” (via NPR)