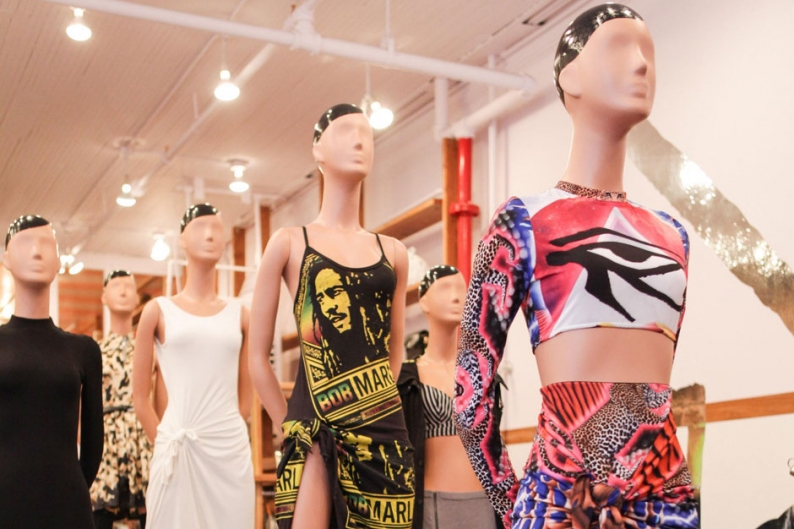 Rihanna’s collection for River Island may have taken a strangely vitriolic blow from some of the British press, but last night’s retail debut at NYC’s Opening Ceremony proved the collection is hitting all the right notes. In a special press preview and pre-sale, people were visibly snapping up the looks — a full rack of sheer black overall dresses was practically decimated by the end of the night, and the black hat adorned with a replica of Rihanna’s Isis tattoo (no, not the Dipset eagle) was capping heads all through the store, including those of some of the New York music luminaries who dropped by: Maluca, Kilo Kish, L-Vis 1990, Brenmar, Natalia Kills.

It helped that the looks were all reasonably priced — the highest-tagged was an oversized parka with “tie around” double sleeves, predicting Céline’s Fall 2013 conceit by about a week — but every look among them was eminently wearable, whether black-and-white bralette or long skirt slit to thigh. Our favorite remained the deconstructed overall, ideally paired with Timbalands and an iPod stacked with DMX. It was a cavalcade of cropped tops, but an accompanying exhibit showcasing some of Rihanna’s most iconic looks — a “RIHtrospective,” hashtag-hashtag — as designed by longtime collaborators Adam Selman and Mel Ottenberg reflected Ms. Fenty’s capacity for exposing her belly. On display: a slit bodycon Bob Marley dress, a Jeremy Scott number made of dogtags, a white gown gathered at the hip and, best of all, the provocative looks Rihanna wore to the Victoria’s Secret fashion show last year, including that vampy black gown with the slit and the garter belt.

“That’s my favorite look, as an overall look,” Ottenberg told SPIN. “If it’s something that looks really good in every picture, 360 degrees, that I know [Rihanna] felt smokin’ hot on fire in, that makes me really happy… it’s giving you leg, it’s giving you some boob, it’s giving you a sick shoe, great accessories and a lot of attitude. She’s good at taking something and making it her own, because she’s such a strong thing.” The glasses and necklace, Ottenberg said, are vintage Chanel.

We also had a chance to chat with Adam Selman — who designs many of Rihanna’s clothes and crafted the River Island collection — about collaborating with the superstar, “Opening Ceremony girls,” double denim, and being a Pisces. “I have six heavenly bodies in my sign right now,” Selman laughed. “Susan Miller told me.”

I’m getting a NYC club girl vibe with your River Island collection, a little Tunnel, a little Aaliyah. What was the inspiration behind it all?

Adam Selman: It was funny… I’m definitely inspired by what I call “OC [Opening Ceremony] Girls,” you know, big into the ’90s, so I love those girls, always gonna follow that kind of girl. I think overall, Rihanna and I wanted it to be easy, unfussy, and clean. We didn’t want anything to be too complicated or too tricky, and I wanted familiar elements. So all those shirt ties built in — you might not have ever seen it done that way, but it’s not an unfamiliar detail. So I think that was what we were going for.

At the same time, you took some risks. I cannot stop thinking about the double jeans and the overall bib crop top.

Everyone’s been asking me what my favorite outfit, and it kind of changes all of the time. But I really like that at the moment. The double jeans, I had actually made for myself maybe over a year ago. I kinda just wanted to do it for myself and then it turned into a thing where I was like, “Oh my God, I love these so much.” And I was so happy that I got away with it — [River Island] were like, “Yes, we love these,” and Rihanna was like, “These are so cool!” I thought it was such a feat. So there are a few risks in there. There’s a basic pair of jeans in there but I wanted to do stuff that was interesting, not just T-shirts and jeans that you could buy anywhere else.

Those in particular seem really Opening Ceremony. Also I love that you’re like, “Let me break every rule: light and dark, double denim.”

I went through a phase where I only wore denim. So this collection, I was like, “Minimum denim, we can’t do a Canadian tuxedo.” [Laughs]

So are OC girls are on [Rihanna’s] radar, too?

I think the OC Instagram… she’s really an Instagram girl, so if you think about that culture of getting inspiration from looking at cool girls out on the town. A lot of it came from that, like, “Oh my God, that girl is mega, look at this picture I just found.” It all goes together. And also just being inspired by old fashion, it just goes together.

It’s been in the making for a long time, right?

Yep, she asked me to do this with her on her birthday last year. So for a year, everytime we got together we’d bounce ideas off each other, and Mel and I would bounce ideas off of her, and she would come back and send us pictures. Just any chance we could get to talk about it. Then in early July, we presented all the sketches, she came in and made sure all the designs were cool. She’s very particular about fabrics and fit and all that. But it has been in the works for a long time.

Was there a conversation about how the collection would reflect music culture at all?

No, I think she really wanted to keep her music separate. I think she wants to be seen more as a creative, as opposed to having to tie everything into her music. Like, she didn’t want “R”s on everything or things that said ‘Rihanna.’ It was very like, no Rs, no Rs.

The little “R” on the buttons will suffice!

Yeah, you gotta have little things. Little touches I think worked out well. 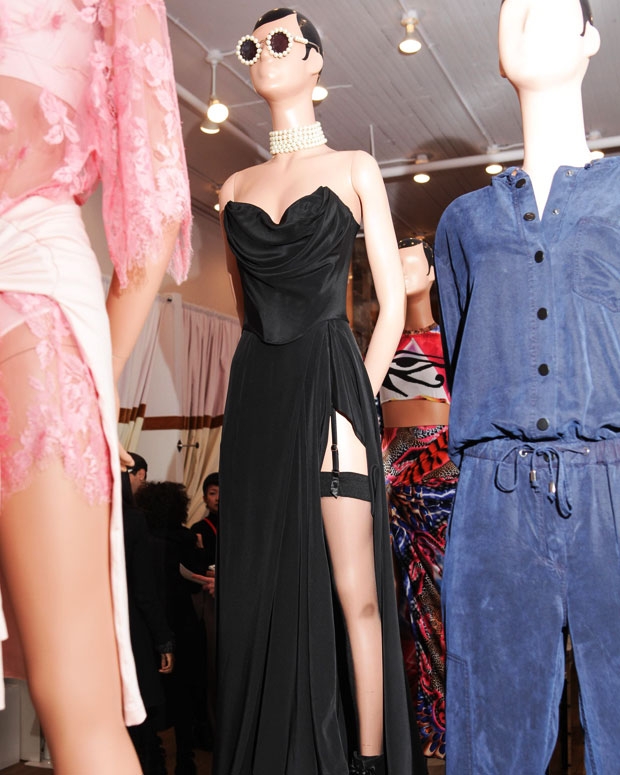 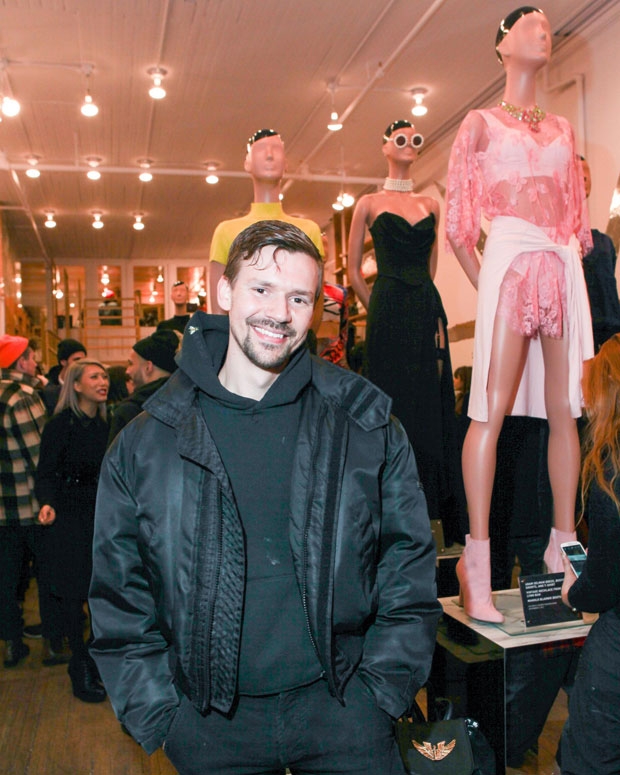 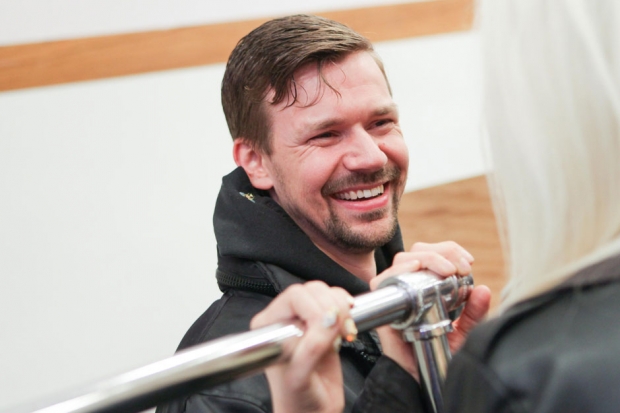