Kaskade, Insomniac to L.A. Times: Lay Off the Ravers

That was Pasquale Rotella’s response to a recent Los Angeles Times article detailing 12 drug-related deaths of attendees, many of them previously unreported, at electronic-dance-music festivals and concerts produced by his company Insomniac Events between 2006 and 2012. Two more deaths were linked to events produced by Reza Gerami’s Go Ventures, the other Los Angeles promoter who came under the Times reporters’ scrutiny.

The Times‘ investigation was based on coroner reports from jurisdictions in several states where the two promoters held a combined 64 events since 2006. (The newspaper’s research also turned up “scores of other drug-related medical emergencies and arrests.”) When drug-related deaths were found linked to attendance at these events, as cited in the coroner reports, the reporters conducted follow-up reporting to confirm the victims’ attendance.

Ecstasy (a.k.a., MDMA or “Molly”) figured frequently in the coroner reports, along with methamphetamine, heroin, alcohol, hydrocodone, GHB, and the hallucinogen “Foxy Meloxy.” Drug toxicity was the cause of death in most cases, although one victim, who was said to be “acting irrationally,” jumped out of his friend’s car and was struck by a semi. Another, after reportedly suffering paranoid delusions at EDC Las Vegas, “returned alone to her Circus Circus hotel room, sent panicked Facebook messages and apparently squeezed through the window, falling more than 20 stories to her death.”

Of course, correlation doesn’t equate to causation. Victims may have taken drugs before or after attending events; it’s possible that they might have had their fatal misadventures even  if the  Insomniac and Go Ventures events had never come to town. The Times article notes Insomniac’s stated no-tolerance policy as well as the “security patrols, standby ambulances and medical stations” that are now the norm at big-budget raves, and it cites the free water Insomniac offers to attendees as an additional safety precaution. But it also suggests that today’s highly profitable “massives,” where attendance may reach 100,000 per day, present public-heath challenges of a degree unprecedented among entertainment events, citing physicians and health officials “who said the problem is far worse than anything they see with rock shows or sports events.”

Instead of taking the report as the sobering indicator of a possible public-health issue, however, Rotella views it as a witch hunt targeting electronic-music fans. In a statement posted to Insomniac’s website, Rotella (who reportedly declined to be interviewed for the Times article) began by praising his events’ fans as “the best, most creative fans in the world” before going on the counterattack. “As part of their mission to twist facts to suit their sensational story,” he complained, “the LA Times treated the opinions of a few people as gospel, turned everyone who enjoys electronic music events into villains, and ignored anyone that did not agree with their biased opinion. Rather than addressing the real issue, rampant drug use in the United States, Rong-Gong ‘Ron’ Lin II and his team preferred to attack our company, our events, our music and Pasquale instead of doing any credible research on health and safety issues facing large music festivals across the world.” 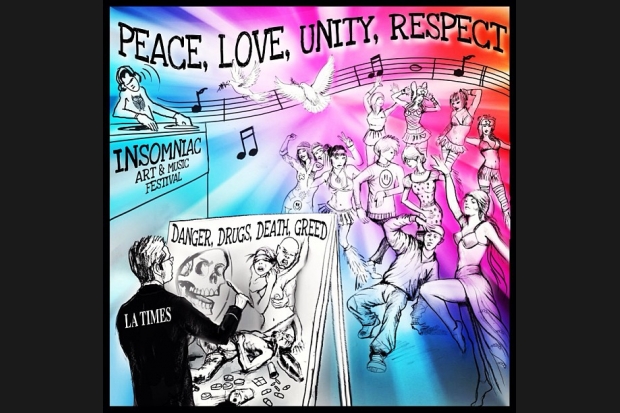 To drive home his us-against-the-world point, Rotella has posted a cartoon to his Instagram account that depicts smiling, tutu-clad ravers dancing beneath the words, “PEACE, LOVE, UNITY, RESPECT” — and a pair of doves bearing, presumably, olive branches — while a Los Angeles Times reporter paints a picture of rape and mayhem beneath a banner reading, “DANGER, DRUGS, DEATH, GREED.” The Times guy is wearing a suit, because, you know, he’s the Man — unlike Rotella, of course, despite the fact that billionaire Ron F.X. Sillerman and corporate behemoth Live Nation are both reportedly vying to acquire Insomniac, which has been valued at between $70 million and $100 million.

Kaskade also assumed an aggrieved pose in a Tumblr post entitled, “No One Knows Who We Are,” in which he dismissed the Times article as “essentially an inflammatory pummeling of the EDM scene” that was “irrelevant and outdated.”

“I am dug in so deep that articles like this one, smacking of uninformed bigotry, fire me up in a pretty passionate way,” wrote the Grammy-nominated producer and DJ. “To assign responsibility of regulating drug use to concert promoters is ludicrous, in the extreme. To paint a picture (bordering on hysteria) of a community of people as capricious and reckless drug users is irresponsible.”

Kaskade’s plea for understanding ended on a particularly sanctimonious note. “But know this: as far as a music culture goes, EDM is the one who will accept the kids on the outliers, the ones who get bullied, the ones who feel like they may not quite fit in. This community is exceptional in its ability to bond all types together, and I am not exaggerating when I say it saves lives. Our audience is intelligent and kind, discriminating only in regards to which sound they like best. Our audience is unprecedented in their drive to proactively support each other.”

The problem with both Rotella and Kaskade’s responses is that by framing a public-health issue as a question of lifestyle, and accusing officials of cracking down on ravers just because ravers are, y’know, different, they sidestep any discussion of the very real substance-abuse problems in youth culture. Circling the wagons no doubt makes many EDC fans feel warmly, fuzzily vindicated, but it does nothing to address the health and safety issues that Rotella himself admits are “facing large music festivals around the world.”

It’s not just about electronic music, not by a long shot. Eleven Bonnaroo attendees have died since 2006.

And it’s not just controlled substances, either. Last October, Long Island’s Haunted Coliseum party, headlined by Swedish House Mafia’s Sebastian Ingrosso, Alesso, and Otto Knows, got shut down after a little more than an hour when EMTs were called to the scene to respond to reports of as many as 100 intoxicated teens at the all-ages event, many of them simply drunk.

Oh, and it’s not just raves. In December, a Zeds Dead show at Philadelphia’s all-ages Electric Factory club was cancelled at 8 p.m. when four or five crowd members, depending on reports, passed out and required hospitalization. (8 p.m.! That’s one hell of a pre-game.)

From Madonna’s infamous Ultra Music Festival ad-lib to Trinidad James’ lyric (“Popped a Molly, I’m sweatin'”) ecstasy is all over popular culture right now. “Partying,” in general, has been one of pop music’s most resilient themes in recent years, whether it’s Ke$ha getting a little bit tipsy or LMFAO unapologetically party-rocking. You can’t blame pop culture for kids wanting to get fucked up any more than you can blame video games for violent psychopaths. But artists and promoters who want to capitalize on hedonism could focus on harm reduction much more.

With teenagers flocking to electronic music in recent years, there’s a huge influx of kids who are coming into contact with drugs and simply don’t know how to handle their shit. The problem is compounded by the fact that many users have no idea what they’re actually putting in their bodies, whether it’s “bath salts” procured from a head shop or dodgy powders scored in a dusty parking lot.

Let’s not let the government off the hook, either: Thanks to the disastrous “War on Drugs,” any discussion of how to take drugs safely is pushed underground. Indeed, legalizing drugs would be one way to ensure that pills and powders weren’t cut with toxic mystery ingredients. (Two “apparently fit young men” in the U.K. recently died after consuming what were suspected to be contaminated pills; a year ago, at least five deaths in British Columbia were linked to ecstasy that had been cut with the more dangerous substances PMA or PMMA.)

Making large-scale events safer is a long, uphill battle. Unfortunately, for Rotella, it seems to be one he’s decided to fight another day. Electric Daisy Carnival is known for its over-the-top amusements and set design; perhaps this summer, along with the Burning Man-styled installations, they should erect a 100-foot-ostrich, its head plunged deep into the Nevada desert. 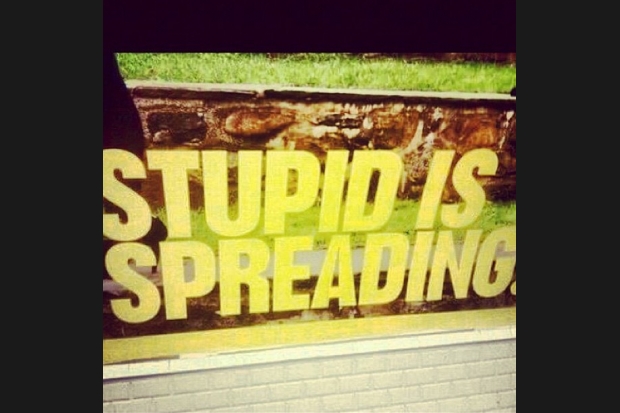