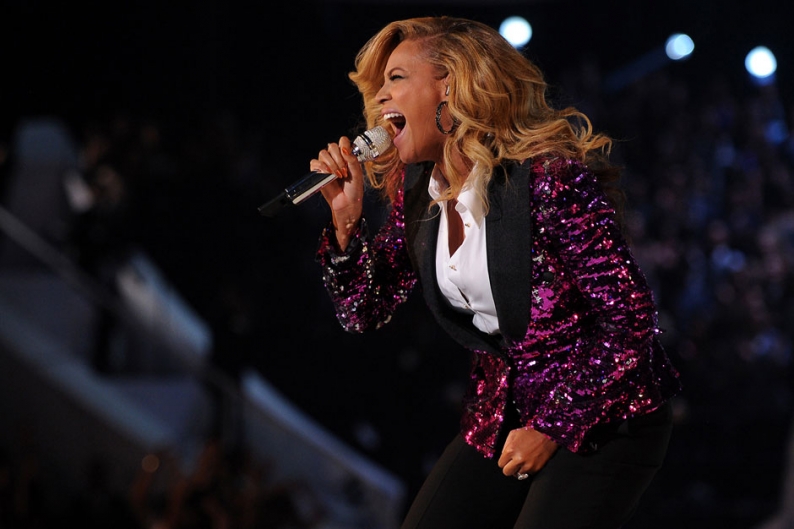 Beyoncé fans unafraid to embarrass themselves by dancing beside arguably the best dancer of this generation will have the chance to join the “Run the World (Girls)” singer during her upcoming Super Bowl halftime performance, the Associated Press reports. Pepsi — you know, the company for which Bey currently serves as “brand ambassador” — announced a contest today that will let 100 people share the Mercedes-Benz Superdome stage in New Orleans with Bey when she plays Super Bowl XLVII on February 3, 2013.

Starting on Saturday (December 29), Bey buffs can submit photos of themselves in various poses (as the AP helpfully points out, eligible positions include “head bopping, feet tapping, and hip shaking”) to www.pepsi.com/halftime. Those pictures will appear in a TV ad introducing the Grammy-winner’s halftime set and 50 winners will be picked to show off their best moves in front of millions. As if that weren’t enough, those destiny’s children chosen can bring along a friend as well. That’s not quite as plush as taking home a 2014 Chevrolet Corvette (as Beyoncé will, Complex notes), but we’ll still call it irreplacable.

The Super Bowl will once again go pop roughly two weeks before the HBO premiere of Beyoncé’s self-titled (and self-directed and self-starring) documentary, which airs on February 16. Aside from the found-footage resembling full-length — which focuses on how the Top 40 titan balances music, business, and motherhood — Bey is also “gearing up to reveal her plan” for a new LP, according to 4 collaborator The-Dream. He recently told Billboard, “there will probably be a couple records you hear before the Super Bowl gets here,” so Beyoncé abounds in the new year.

Pepsi’s photo contest ends on January 19, but the deadline for anyone hoping to dance alongside Bey is January 11. Put Hannah Horvath to shame, people.