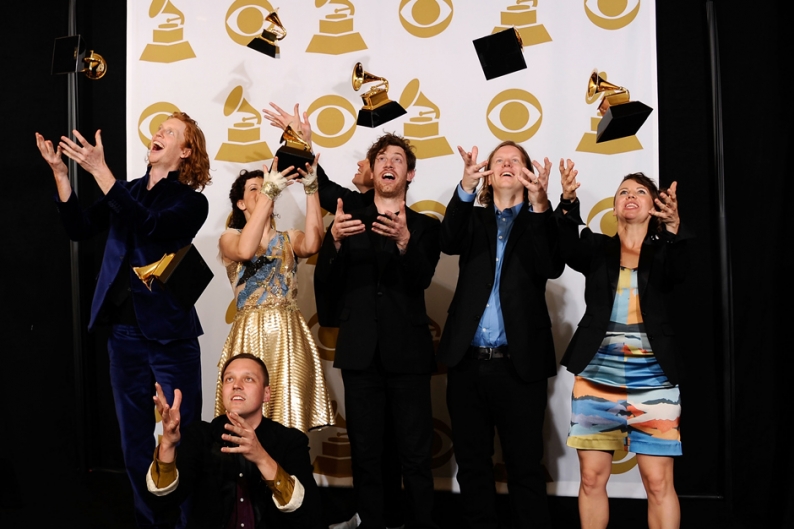 Two years ago, LCD Soundsystem main brain and DFA Records co-founder James Murphy told SPIN that he was leaving his beloved band behind in part because, “There are other things I haven’t been able to do because of it. Twice, I couldn’t make an Arcade Fire record.” As first world a problem as that is, we’ve hardly been alone in wondering what a collaboration between those epic-minded Canucks and this nu-disco genius would yield. At long last, Music Week confirms that we’ll indeed get the chance to experience that blessed union.

Facebook fan hub Arcade Fire Tube has excerpted a piece of the trade journal’s print-only article on the band’s manager Scott Rodger, who says: “They’re in with James Murphy on three or so songs, plus Markus Dravs [Brian Eno, Björk, Coldplay, Mumford and Sons] who is a long-time collaborator. They write too many songs — that’s a good problem to have. There’s around 35 songs with Arcade Fire, two albums’-worth for sure.” Dravs engineered 2007’s Neon Bible and produced 2010’s Grammy-winner The Suburbs.

As we reported in October, Arcade Fire’s new album is due by the end of 2013. There were initial setbacks due to the roof of their old studio collapsing, and they had otherwise been working at a leisurely pace according to drummer Jeremy Gara who said they’ve just been “working on music and growing beards.” Murphy, of course, is a noted owner of facial hair. Earlier that month, we heard the new song “Crucified Again” via fan footage of an intimate New York dinner show, and this week yielded a super secret Montreal gig chock full of new stuff.

In October, when pressed about the rumors that he was producing the next Arcade Fire album, Murphy told the Huffington Post: “That’s not necessarily true. We don’t work like that. Because I work with friends, if I have time and they’re doing something and I’m on the East Coast, then we can do something. But also they don’t need a producer, in a way. They produce themselves. When I was making my record, any number of people came and spent a couple weeks or a week hanging out and being involved in the process.”