Bieber, who performed during the 2011 and 2010 broadcasts, has been nominated for three AMA statues, including Artist of the Year, which pits him against Drake, Katy Perry, Maroon 5, and Rihanna. If Bieber wins the top honor, it would be his second time earning the distinction, after taking home the Artist of the Year trophy at the 2010 AMAs. The 18-year-old pop singer will also face off with fellow performers Usher and Pitbull for Favorite Male Pop/Rock Artist (another category he won in 2010, defeating his mentor Usher) and with Minaj in the Favorite Pop/Rock Album race with his third LP, Believe.

Usher landed a second nomination for Favorite Male Soul/R&B Artist, which he won in 2010 and 2011, beating out Chris Brown and Trey Songz both times. The R&B singer, who performed with Swedish House Mafia at the 2010 AMAs, could make it a threepeat if he triumphs over Brown and Songz again this year. For his live show, Usher will likely treat audiences to a cut from his seventh studio album, Looking 4 Myself. Perhaps he’ll go with “Numb,” his recent antidote to onstage sickness?

No Doubt aren’t up for any awards for their first studio album in 11 years, Push and Shove, nor is fellow feathers enthusiast Ke$ha, album chart hanger-on Pink, and give-a-fuck-less Christina Aguilera. 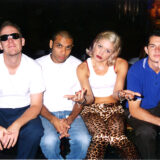 Minaj walked away with two AMAs last year and could snag four this time around. The Pink One (whose upcoming re-release, Pink Friday: Roman Reloaded – The Re-Up, drops on November 19) tied with Rihanna for the night’s most nods. Other confirmed performers Pitbull and Underwood pulled down two nominations respectively, while Swift and Linkin Park each locked down one.

The American Music Awards, founded by the late Dick Clark, will be broadcast live from the Nokia Theater in Los Angeles on Sunday, November 18 at 8 p.m. EST. Fans can vote at the AMA website or at the show’s page on ABC’s website.