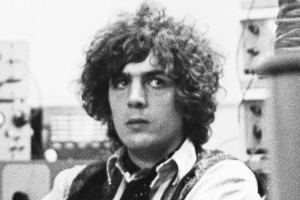 When founding member Syd Barrett left Pink Floyd unceremoniously in 1968, many were convinced the legendary band wouldn’t survive without him. Both parties would continue creating, though, Barrett’s imprint on British psychedelia made deeper still by a pair of definitively schizophrenic, chaotic solo releases (recorded with his former bandmates as well as members of Canterbury psych-hounds Soft Machine, featuring Robert Wyatt on drums) in the early ’70s that would preface both 30 years in self-imposed seclusion as well as a legacy of wild-eyed experimentation, fractured fable-spinning, hard-angled folk and gleefully derailed song structures.

Geologist: He’s probably the most important musical inspiration, at least for me. Everything from the playful songwriting to the fantasy side. There’s a famous Syd Barrett story playing his guitar with a Zippo as a slide, he actually hadn’t thought of doing that until he saw the band AMM perform. He would see them just beating their guitars with rulers and all these industrial objects and he thought, “Oh, whenever Pink Floyd goes into our excursionary passages, we should borrow these techniques.” And that was the first place I’d ever heard of AMM. That sort of sent me down the world of the improv music scene.