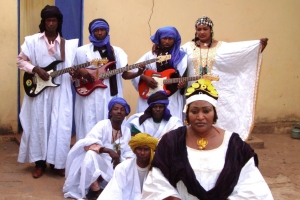 A protégé and cousin of African blues guitar master Ali Farka Touré, Khaira Arby has been one of Mali’s most celebrated singers for two decades, but was little known in the U.S. before her first American tour in 2010. Singing in four languages, she holds forth with the self-possessed authority and almost Middle Eastern keen common to Mali’s greatest female singers, usually over psychedelic guitar lines that swirl and tangle with traditional West African stringed instrumentation.

Avey Tare: Josh definitely brought her to everyone’s attention. Having just seen Khaira Arby play in L.A., it’s just the kind of music that interests me the most — it’s kind of like a mystery to me. I think it’s how people talk about us: I can’t figure out if [her band is] jamming or if they wrote the song, or what parts are even worked out. I can’t even figure out how they write the song. It makes me want to listen to it more and more. To the point of where something like a really elaborate guitar solo — something that wouldn’t normally interest me at all in the context of rock music — just astounds me.