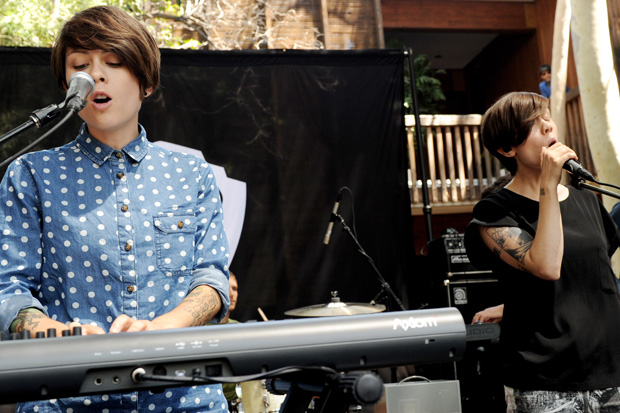 Canuck alt-poppers Tegan and Sara are back with a folksy, sisterly sort of vengeance. It’s been three years since the Quin twins’ all-growsed-up sixth studio album Sainthood and word is they’ve just wrapped the next one. The still untitled set is due out early next year, but a savvy fan has already captured a new song live and shared it to YouTube. “Closer” is upbeat and heavy on the hook, starting subtle and building to sing-along bigness: “It’s not just all physical / I’m the type who will get oh so critical / So let’s make things physical / I won’t treat you like you’re oh so typical.” The song was recorded via a summer series at the duo’s label, Warner Bros.

The new record was made with help from three rock heavy-hitters — Greg Kurstin (the Shins, Sia), Mike Elizondo (Regina Spektor, Rilo Kiley) and Justin Meldal-Johnsen (Neon Trees, M83) — but Tegan and Sara have been dipping their sticky tendrils into the EDM pot as well. February saw the debut of their pulse-pounding “Body Work” collaboration with Grammy-nominated producer Morgan Page, and on September 10 they’ll join King House himself David Guetta on his new album Nothing But the Beat 2.0. Check out an all-too-quick preview clip of their song, “Every Chance We Get We Run” below.

Video: Tegan and Sara – “That Girl”