Nudity, violence, the word "rape" — Manson checks off the boxes in his latest lurch for controversy 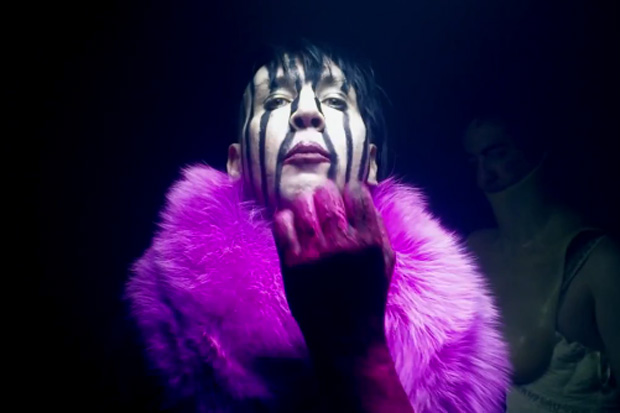 “This is my beautiful show, where everything is shot in slow motion,” sings Marilyn Manson in his video for “Slo-Mo-Tion,” a cut off his latest album, Born Villain. Manson directed the clip himself, which is better than this, and it’s as creepy as you’d expect it to be: putrid neon paint, Manson spittling, prosthetic breasts and, of course, Manson saying the words “slow motion” really slowly. But those aren’t the really shocking parts. There’s a scene where he’s holding a machine gun in front of a window with red lettering on it that spells out “rape.” And the video ends with him wearing a long leather coat and a partial gasmask, as he sits atop a building pointing his gun at someone riding by on a bicycle.

The video follows up two creepy clips, one shot by Shia LaBeouf for Born Villain’s title track and a twisted-dinner-party-themed one for “No Reflection.” This time, though, Manson is releasing a jittery electro remix of the song, which he made with French dubstep crew Dirtyphonics and is streaming here. Time will tell if that’s the version he brings on the road with him, when he tours with Rob Zombie on the Twins of Evil Tour later this year.