What We Learned From James Murphy’s ‘Fallon’ Chat and Jam 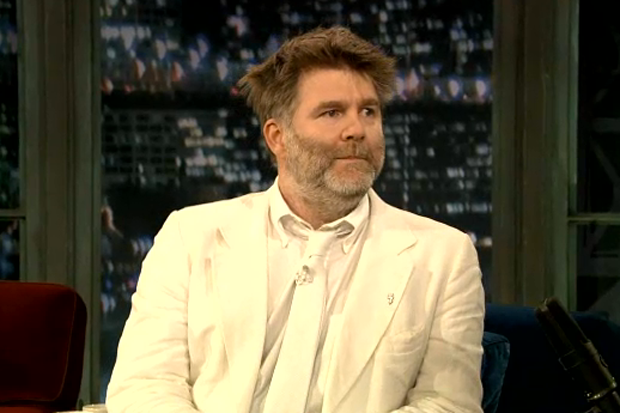 More than a year after LCD Soundsystem played their emotional last show, James Murphy has been making the interview rounds lately in support of his final-gig documentary Shut Up and Play the Hits, which hits theaters on July 18. Murphy already told the New York Times about how he almost appeared in a nixed Noah Baumbach adaptation of Jonathan Franzen’s The Correction on HBO, his plans for a Brooklyn retail store called the House of Good, and the sliver of a chance his band could reunite. Last night, the New York dance-rock lifer stopped by Late Night With Jimmy Fallon, just a couple of evenings after Frank Ocean made his TV debut on the same stage.

In a Truman Capote-worthy white suit, Murphy talked about the reasons for LCD Soundsystem’s breakup, the story behind that time he muffed a chance to write for what would become Seinfeld, and the undeniable awesomeness of the Beastie Boys’ late Adam “MCA” Yauch. He even played a little guitar with the Roots, which for whatever reason isn’t on NBC’s official stream. (The band introduced him to the stage with a movie-title-appropriate cover of the Black Eyed Peas’ “Shut Up.”

Here’s what we learned:

2. Murphy’s living arrangements after spurning Seinfeld were less than luxurious. He told Fallon how, in 1992, he met a sitcom producer who, concerned that other writers for their New York-based show were moving to Los Angeles, offered him the opportunity to write scripts. “I was like, ‘Yeah, I’m totally gonna do that! Or I’m gonna sit around in my room and play guitar,'” Murphy recalled. “So I didn’t do it. And then they wrote me another letter, like, ‘Hey, how’s your cat!'” He never did it. About a decade ago, while moving boxes from his parents’ house, Murphy realized the show had been Seinfeld. “But to be fair, I instead lived on an inflatable mattress in my office for two and a half years,” he said.

3. LCD Soundsystem’s This Is Happening art was inspired by the Smiths. “That’s very kind of Morrissey,” Fallon quipped, in a faux-British accent, while holding up the LP cover. Turned out he wasn’t far wrong: “That was actually the color choice, the blue from Hatful of Hollow,” Murphy revealed, referring to the Smiths compilation that rivals only Louder Than Bombs for a place in the hearts of the English band’s rarity-seeking fans. “Pretty nerdy,” the LCD Soundsystem inexplicably deems this fact.

4. Murphy pulled the plug on LCD Soundsystem because it was never meant to be a full-time band in the first place. “I think it was unsustainable,” he told Fallon. “We had planned on the band being a short-term, kind of like, ‘Oh, hey, I made a record.’ And somebody said, ‘Hey, will you come play with your band,’ and I was like, ‘I don’t have a band.’ So I asked my friends literally for like a weekend to go to London and play two gigs in London and one gig in Glasgow and then fly home and that was the end of it. That was 10 years ago. And then years later we’re all like, ‘This was kind of a long weekend.” It made it impossible to have a life or do other stuff. Everybody else in the band had other jobs.”

5. Murphy is collecting Social Security checks. Not really. But he jokes that he was 35 when LCD Soundsystem’s first album came out, “which makes me 72 years old.” Fallon commends his plastic surgery. (Murphy credits juicing.)

6. Murphy and Fallon love the late Adam “MCA” Yauch of the Beastie Boys. Yauch’s Oscilloscope is distributing Shut Up and Play the Hits. Murphy calls him “a dear friend and an incredible entrepreneur and an inspiring person.” (Fallon’s use of the present tense to refer to Yauch, who died in May at age 47, could raise questions about when the interview was recorded, but the sentiment is what’s important here.)

7. Murphy made his first guitar-playing appearance in 20 years last night with the Roots. Murphy said it had been two decades since he last played guitar, but he looked plenty comfortable riffing with the Roots as the show went to break. Again, for some reason this part was omitted from the official video.