Collaborative track is due for a September 2 release 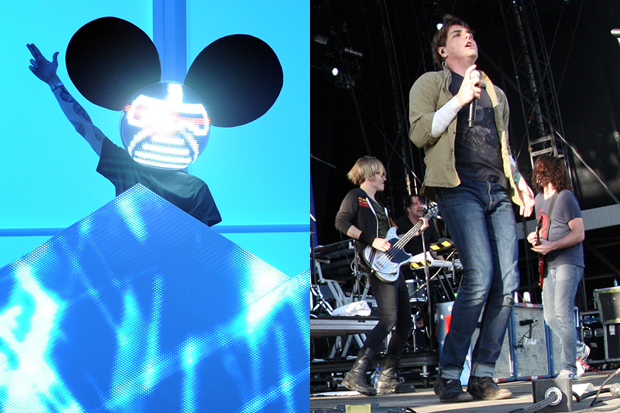 In January, My Chemical Romance shared a video for “The Kids From Yesterday,” from 2010 album Danger Days: The True Lives of the Fabulous Killjoys. The clip’s nostalgic trip through MCR’s now-decade-plus as a band brought to mind the days when the New Jersey emo-punks drew next-Nirvana hype, the type of unfair music-biz hyperbole that now routinely gets extended to the American dubstep and EDM crowd. Naturally, then, My Chem’s Gerard Way has lent his vocals to a new track by U.S. post-Daft Punk figurehead Deadmau5. Titled “Professional Griefers,” this strobe-lit dance-pop track is due out on September 2, and you can hear a radio rip below via Deadmau5’s YouTube channel.

“Give me the sound to see / Another world outside that’s full of / All the broken things that I made,” Way appears to be singing atop the straight-ahead electronic beat. An instrumental version of “Professional Griefers” has been kicking around for almost a year at least, because Deadmau5 unveiled a snippet during Lollapalooza 2011, replacing Way’s vocals with Daft Punk’s “Harder, Better, Faster Stronger.” As the NME points out, Deadmau5 is prepping a new album for release later in 2012, while MCR are also at work on their next LP. Check out Deadmau5’s new video for “The Veldt” here.