'I Know What Love Isn't' arrives on September 4 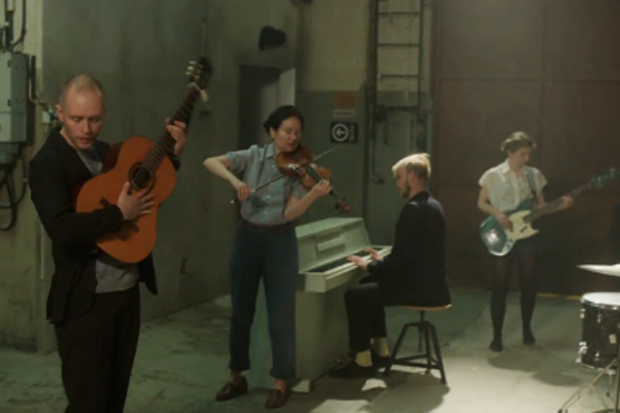 If Jens Lekman is entering his “blue” period, he sure makes a striking Old Guitarist. His head freshly shaved, his attire unusually dark and drab, the Swedish singer and songwriter brings the exquisite heartbreak of “Erica America” to life beside a dingy, turquoise-hued freight elevator in the song’s starkly arresting new video. From Lekman’s upcoming first album in five years, I Know What Love Isn’t, due out on September 4 via Secretly Canadian (one day earlier in the U.K. and EU), the song is beautifully bereft, finding the painful transcendence in being utterly defenseless, and the video neatly follows suit, with direction by masterful past collaborator Marcus Söderlund.

“Erica America” is both emotionally and musically rich — replete with vivid lyrics and string flourishes — and yet also, in its unplugged quality, relatively clear production values, and intensity of feeling, somehow completely naked. With gorgeous cinematography, this one-shot performance video achieves a similar effect, showing Lekman and his backing band in a bleak, shadowy setting that emphasizes the subtleties of their performance, as sunlight glints through the windows. “Summer’s exhausting me, with these exhaust fumes and empty promises / And promises of no more empty promises,” Lekman croons, straight-faced. This video evokes both the emptiness and the promises. The song sardonically mentions Sinatra, but he had his In the Wee Small Hours, too.