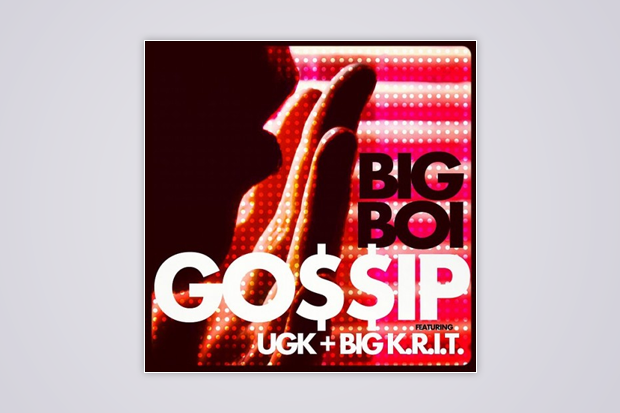 “No introductions needed,” Big Boi begins on the latest track to surface from the OutKast-half-not-just-doing-commercials-and-Hendrix-biopics’ upcoming Vicious Lies and Dangerous Rumors (currently set for November 13 on Def Jam), but it’s hard to get past the impressive artist lineup on no-nonsense posse cut “Gossip.” Particularly considering the track, which premiered on Atlanta radio DJ Greg Street’s show last night, contains verses from both halves of Texas gangsta-rap heavyweights UGK, including Pimp C, who died four-and-a-half years ago. Throw in Big K.R.I.T., the Mississippi up-and-comer who rocked Conan’s TV show just a night earlier, and you have a generation-spanning array of Southern hip-hop greatness.

The track itself, ostensibly a tirade against haters who talk too much, is hard-charging and lyrically deft, with old-school production relying on chopped-up guitars and banging drum machines. All in all, a fine change-up after stripper-friendly “She Said OK,” which Street also spun last night. Boi is as nimble as ever, rhyming about Coca-Cola and cockatoos, while the laid-back Big K.R.I.T. (“I had you trippin’ like you smokin’ furl”), sneering Bun B (“Ain’t nobody body trippin’ ’cause the money already made”), and booming Pimp C (whose posthumous verse trips up on a dated “no homo” aside that gives away its inevitable age). Still, as hard as it is to judge by tagged-up radio rips, the track isn’t as instantly thrilling as its roster — nor as the untouchable procession of singles that led to Sir Lucious Left Foot./p>

Stream it below while it lasts, or hear it over at 2DopeBoyz.

Also, old-school hip-hop heads might cringe, but does anyone else remember when Lil Wayne debuted his own song called “Gossip” at a BET Awards show — and he used the opportunity to declare rumors of hip-hop’s death exaggerated? Whatever the Young Money boss’s more recent artistic failings, that moment showed a world-seizing ambition that other rappers would still do well to emulate for themselves.