Mississippi rapper kicks off his tour on July 11; 'Live From the Underground' is out now 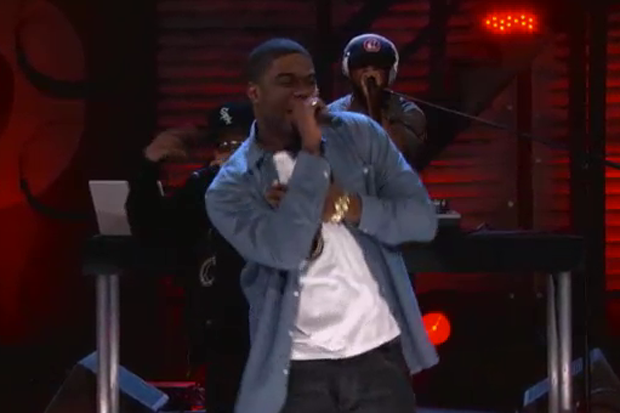 On Live From the Underground, Big K.R.I.T.’s proper debut LP after three album-like mixtapes, “I Got This” finds the skilled Mississippi rapper reaching back toward the squirmy funk synth lines of ’90s West Coast G-funk. Performing the song last night on Conan, however, K.R.I.T. leaned toward a slightly different type of hip-hop classicism. Joined by DJ Wally Sparks and hypeman Big Sant, K.R.I.T. gave an animated rendition of the album highlight, occasionally jumping up and down, but while Sparks came with the requisite MacBook, what stood out most was this DJ’s energetic scratching. Of course, K.R.I.T. had to tone down his song’s “fuck these haters, fuck these hoes” chorus, but for a track that finds him squaring his country values with hip-hop’s commercial imperatives, this live take was remarkably uncompromising. As with the opening blasts of Killer Mike’s similarly great new album, it’s a sign that the future of rap won’t necessarily be purely digital, AraabMuzik’s MPC heroics notwithstanding; every art form, after all, goes through its neoclassical renaissance.

As Conan pointed out during the broadcast, K.R.I.T. kicks off his Live From the Underground tour on July 11 in Detroit.