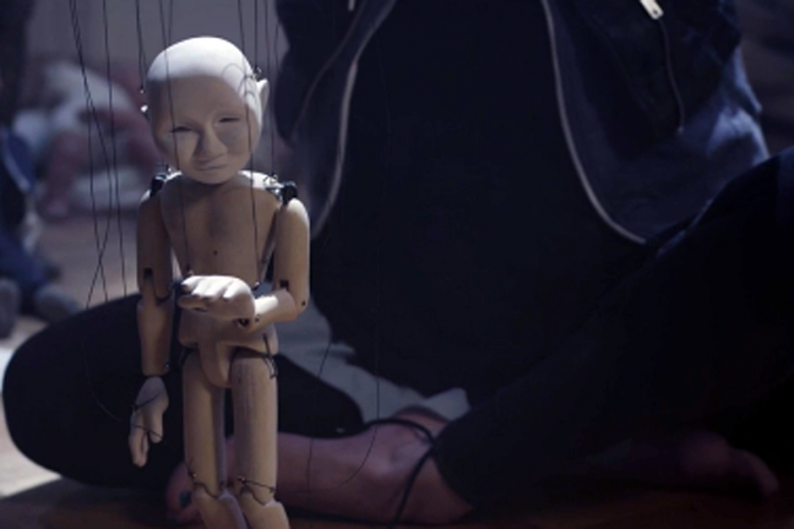 “Watch me dance, I’m a puppet,” Thom Yorke commands in “Up on the Ladder,” from Radiohead’s In Rainbows bonus disc. “You can almost see the string.” Given the notoriously herky-jerk movements of the Radiohead frontman, not to mention his paranoid lyrical themes, it’s almost hard to believe puppeteering hasn’t been a more prominent idée fixe in Yorke’s work. The ominous, mystifying, and masterfully orchestrated video for “This,” one of Yorke’s collaborations from Berlin electro-chimps Modeselektor’s Monkeytown, brings the humble marionette to its rightful place in Radiohead lore (via Fact).

One part Being John Malkovich, one part that episode of The Twilight Zone with the creepy “Talking Tina” doll, the video focuses on a hooded figure (sorry, Radiohead nerds — not Yorke) who makes a humanoid puppet do some pretty slick dance moves. Tops start to spin, toy monkeys play percussion, and rocking horses rock, all seemingly of their own accord. Directed by London creative agency Future Deluxe, whose past clients have included Africa Hitech and Groove Armada, the clip maintains the shadowy foreboding of previous Modeselektor-Yorke video “Shipwreck,” — a tone that nicely suits the track’s glitchy, mutant lurch.

Around three-minute mark, some brightly colored animation creeps in, and the whole thing takes a turn for the beautifully bizarre. We still have our suspicions about the doll: Sure, unlike with the other toys, we never actually see it doing anything. But you never know, do you?