Watch them and their excellent teeth now! 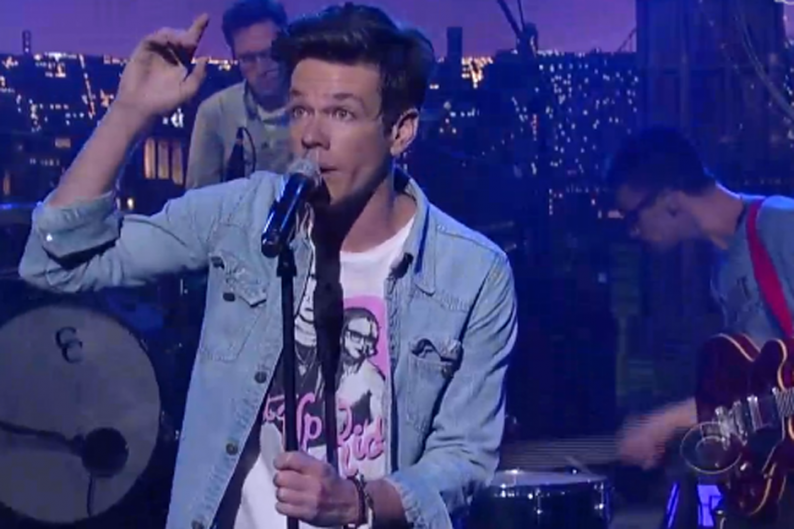 Last night’s TV lineup turned out majestic pop-rockers, reunited Southern rappers, and snotty Swedish garage-rockers. Progress, right? It wasn’t actually as varied as that might sound, but we’ll break it down for you.

New York’s fun., led by Nate Ruess of Arizona cult faves the Format, stopped by Late Show With David Letterman for an expectedly bombastic rendition of chart-topper “We Are Young,”, though when we weren’t lamenting the absence of that song’s featured guest Janelle Monáe we couldn’t help but marvel at Ruess’s impossibly pearly whites. Letterman approved (via the Audio Perv).

Cee Lo Green took a break from his judging duties on The Voice to dress up in a golden gladiatorial get-up — admirably, not recycled from his appearance in Madonna’s imperial Super Bowl halftime spectacle — and moved his lips to a new song by his reunited Goodie Mob titled “Fight to Win.” We said we’d give Green the benefit of the doubt despite Goodie’s facepalm-worthy reported title of Age Against the Machine, and spirited performances like his contribution to last year’s Buddy Holly tribute compilation attest that he hasn’t entirely morphed into karaoke self-caricature. But the royal pomp of this blandly on-the-nose comeback single feels more grandiose than grand, despite an upbeat outro. (Two other notes: First, whatever was going on with the Goodie men’s teeth made them look even more ADA-approved than fun.’s! And second, it’s worth pointing out that the Holly comp marked Fiona Apple’s wonderful pre-comeback comeback.)

Last but not least, the Hives brought their matching formal-wear finery to Jimmy Kimmel Live!. Frontman Howlin’ Pelle Almqvist manically strolled the stage as the top-hatted Swedes powered through two unabashed party-rockers from upcoming their June 4 album Lex Hives. The glam-boogieing “Go Right Ahead” we’ve heard, but “Wait a Minute,” which might break its predecessor’s record for repetitions of an otherwise-forgettable title phrase in a three-minute span, is new. Happily, we didn’t notice the band members’ teeth, which at least in this performance failed to outshine the music.