Watch Fred Durst Rap His Own Song at Karaoke 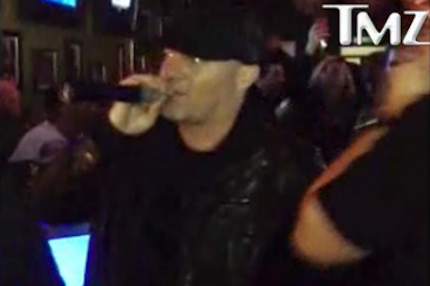 It looks like Fred Durst has snapped out of the funk of that insane juice cleanse debacle. The Limp Bizkit frontman seemed a sight more encouraged last night as he busted out some pretty ballsy karaoke at a pub on Sunset Boulevard in L.A., along with fellow manchild Nick Swardson and Reno 911 star Cedric Yarborough. The night included a cover of his own song, "Nookie." Don’t worry, though — just in case we were worried about his mental state, according to TMZ, who captured the “performance” on tape, he also whipped out a cover of Gnarls Barkley’s "Crazy." And Durst sort of remembered the words to his 1999 hit (he only looked at the screen… well, the entire time). Does this count as a preview for Douchebag? To think, 3,000 miles away, Jay-Z was rapping his own songs onstage at Carnegie Hall.