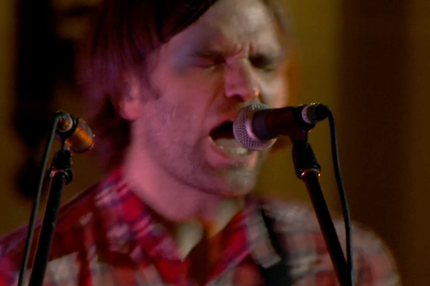 Chances are you probably weren’t one of the chosen few who crammed under the skylight-lit courtyard in one of the country’s oldest museums to watch Death Cab for Cuties’ intimate Live from the Artists Den set. As consolation, SPINhas an exclusive peek into the invite-only Brooklyn Museum show ahead of its public television premiere February 17.

A plaid-clad Ben Gifford and Co. saunter through “You Are a Tourist” from last year’s Codes and Keys as the audience bobs along. “Every physical space we play music in is naturally going to bring out something unique,” Gifford says in the clip, as bandmate Chris Walla nods next to him. “I can’t think of a more unique room we’ve played in the recent history.”

A new season of the PBS series, which features musicians ranging from big-name rock acts to bearded indie heroes performing in grand venues across the U.S., kicks off February 3 with megastar Adele unleashing her signature wail at the Santa Monica Bay Woman’s Club (we’ve posted a look at her performance here). Also on the roster: The Fray, Kid Rock, Amos Lee featuring Calexico, and Iron and Wine. For listings visit artistsden.com.