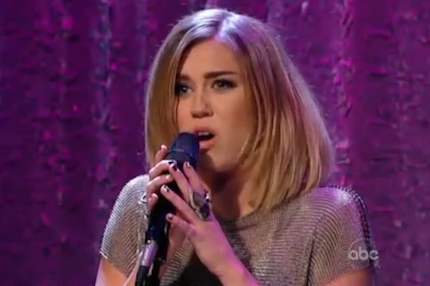 Something about Bob Dylan’s songs makes very big pop stars want to take risks. For that alone, Amnesty International benefit compilation Chimes of Freedom, which brings together four discs of Dylan covers, is a very welcome arrival, even though it’s not as if Dylan hasn’t been covered a kajillion times before. Ke$ha’s EMA-intimate take on “Don’t Think Twice, It’s All Right” goes the furthest, but Miley Cyrus also takes a break from devouring penis cakes, devouring stoner cakes, and otherwise partying in the U.S.A. to perform a bare-bones, country-tinged cover of Blood on the Tracks heartbreaker “You’re Gonna Make Me Lonesome When You Go.”

A bare-midriffed Cyrus and her busker-hirsute Hoosier guitarist, Johnzo West, took their “Lonesome” to Jimmy Kimmel Live last night. It’s nice! Cyrus sings with a prairie lilt that does a good job of showing off the former Hannah Montana star’s totally legit vocal chops. West does the melancholy little descending arpeggios while bobbing around jovially. One hopes Cyrus realizes there’s nothing inherently superior about a coffeehouse-style performance versus her usual pop fare, but then again, neither is anything necessarily rockist or somehow bad about appreciating a well-sung song — as the passing of Whitney Houston (obviously a far greater vocal talent, but still) seems to have reminded everyone.

All that said, the problem with covering Dylan is everybody covers Dylan. Cyrus’ “Lonesome” isn’t irritatingly Starbucks-jazzy, like Madeline Peyroux’s. But then again, it doesn’t have quite the haunting guitar introduction of Shawn Colvin’s clear-as-a-bell Lilith-fare rendition, either. Nor is it indie bossa nova, like Everything But the Girl half Ben Watt’s 1983 take. It’s not as slow and distant as arty folk singer Marissa Nadler’s. And unlike Rhett Miller’s 2011 version, it doesn’t have Jon Brion on piano.