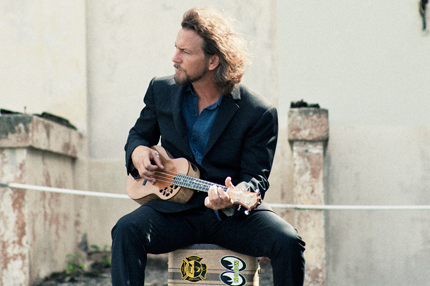 Eddie Vedder invites you to tiptoe through the tulips with him. After focusing on his main band last year with a 20th anniversary bash, a Cameron Crowe documentary, and a new song, the Pearl Jam frontman will be heading back out on his own again in support of Grammy-nominated 2011 full-length Ukulele Songs.

A 13-city spring solo tour will take Vedder through theaters from Las Vegas, on April 11, to Orlando, Florida, on May 16, plus a stop at the New Orleans Jazz & Heritage Festival on May 3. Joining him once again will be Irish singer-songwriter Glen Hansard, of folk-rock duo the Swell Season and rootsy rockers the Frames. (Hansard has also been known to perform on occasion with Brooklyn-via-Idaho folkie and Stephen King-approved novelist Josh Ritter, whose So Runs the World Away you might also love.)

Tickets for the New Orleans Jazz Fest are on sale now. All other tickets for Vedder’s upcoming tour will go on sale on February 3, though eligible members of Pearl Jam’s Ten Club could buy them through a presale starting yesterday.