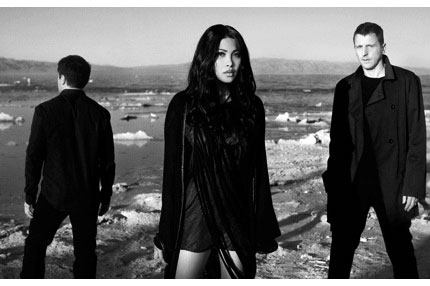 The Girl With the Dragon Tattoo soundtrack came out less than two weeks ago, but a new, non-soundtrack release from Trent Reznor could be here in early 2012. How to Destroy Angels, the former Nine Inch Nails mastermind’s current band with wife Mariqueen Maandig and collaborator Atticus Ross (Dragon Tattoo, The Social Network) will release their full-length debut “probably [in the] first quarter of next year,” Reznor told Rolling Stone. Reznor previously revealed the album is in its mixing phase.

How to Destroy Angels put out a six-track EP last year, and the Dragon Tattoo soundtrack includes their cover of Bryan Ferry’s “Is Your Love Strong Enough?” The as-yet-untitled album will mark a slight change to a more vibrant sound, according to Rolling Stone. Where the first EP was a six-week affair not far removed from other Reznor projects or influences, the album “sounds like How to Destroy Angels now, instead of sounding like other stuff,” Reznor said.

Reznor also discussed how he balanced his soundtrack and full-band work. As a reprieve from the bleakness of the Dragon Tattoo score, How to Destroy Angels “became much more rhythmic and not any happier, but it really started to take on its own identity,” Reznor told Rolling Stone. “We were influenced by early Cabaret Voltaire — it’s very deconstructed rhythmically and more textural.”

You know who’s a huge fan of early Cabaret Voltaire? Babies! Reznor and Maandiq are reportedly expecting their second child, which will likely impact any potential touring plans. Reznor is quoted as saying he wants to perform live “in some capacity” but that a full-blown tour isn’t exactly what he’s craving at the moment.

According to the Hollywood Reporter, the How to Destroy Angels album will come out on Reznor’s own Null Corporation label. “No committees, no e-mails a week later of why you can’t do this,” Reznor reportedly said. “There’s no talking to people on the other side of the world that have their own set of agendas and ‘no’ written a hundred different ways on a piece of paper.”

Could new Nine Inch Nails be next? In March, Reznor said he would be turning his attention toe new NIN material. “Nine Inch Nails is not dead and I plan to focus on that next,” he wrote on a fan forum. In the same post, Reznor also listed his other publicly announced projects — the Dragon Tattoo score, the How to Destroy Angels album — so NIN fans have at least some excuse to keep hoping for a follow-up to 2008’s The Slip.