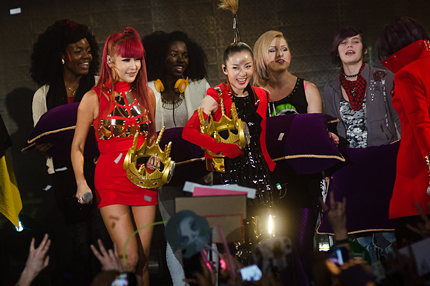 “We were worrying,” CL says. “What if a lot of fans won’t show up?” Lee Chae-rin of Korean hip-pop girl crew 2NE1 shared an honest moment with SPIN just moments after the group stormed the stage at New York’s Best Buy Theater early Monday night. Their brief headlining performance was their first on U.S. soil as well as part of MTV Iggy’s Best New Band blowout, the finish line to an online contest in which they were top vote-getters. Much of that success came on the strength of the group’s fervent (and extraordinarily web-savvy) fanbase, who often refer to themselves collectively as Blackjacks. Those Blackjacks in this particular corner of the globe came to Times Square in numbers — so many, in fact, that the worrying seems curious in retrospect. With Times Square having morphed into even more of outdoor mall over the past two years, the excitement surrounding the show added a tiny bit of chaos to the calm.

But underground, deep inside the theater, the feeling was far less muted. Three tiers of glow band-bedecked fans were in position, eager to finally catch a glimpse of the girls in person. Mothers, daughters, sons, fathers, the works.And every runner-up performer that preceded them — be it Malaysian lawyer/boutique owner/Nirvana-covering singer-songwriter Yuna or Jamaican lover’s rock lothario (arguably the guy behind last year’s Song of the Summer) Gyptian — felt like just one more hurdle in between.

Every interstitial breather, every baffling Matt Pinfield-ism and Sway-ism, every interview segment with anyone but 2NE1, brought on more sighing and fidgeting in seats. But then there they were, down on the street outside, just saying hello to us before they made the same trip downstairs that we did. Cameras followed them all the way to sidestage. The room jittered and heaved. Clusters of digital cameras began bobbing up and down from front to back, ready for the moment they’d finally step into view. And then they did.

Four hits (save for “Ugly”, an unfortunate omission) and they were done. They came, they dance, they conquered, they even received crowns. We screamed. Waiting for the way out to clear, three Montclair State students facing a trip back to Jersey caught their breath for a second. “That was so emotionally draining,” Elene Badillo, 20, gasped. Adrianna Andino, also 20, had no words. Her hair was done up in one elongated, cherry stem-like extension just like Dara’s, her eyes were glazed over. She nodded in agreement.

David Bevan
Tags: 2NE1, We Were There