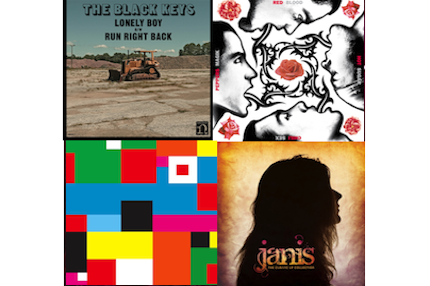 Every April, the nation’s independently owned music shops celebrate Record Store Day by offering up loads of exclusive and limited releases. This year, music fans will get a second holiday on November 25, the day after Thanksgiving, as Record Store Day holds its second annual “Back to Black Friday.” True to its name, the event will see the release of super-limited, mostly vinyl-only exclusives — a fine counterpart to the music industry’s huge slate of big-name albums dropping in time for the start of holiday shopping season, like Rihanna’s Talk That Talk and Yelawolf’s Radioactive.

A who’s who of music royalty is participating, including the Beatles and the Rolling Stones, as well as the Beastie Boys, the Black Keys, and Wilco. Check out the full list of special releases here, and check here to find a participating store near you. SPIN has helpfullynarrowed the list down to 20 essential “Back to Black Friday” releases (but please remember, not every store will stock all items):

Ryan Adams: “Do I Wait” 7″
The singer-songwriter recorded these two demo tracks during his sessions for new album Ashes & Fire.

The Black Keys, “Lonely Boy” 12″
You might not have moves like the star of this song’s video — one Derrick T. Tuggle — but vinyl seems like the ideal format to listen to the first single from the Akron, Ohio blues-rock duo’s upcoming El Camino.

The Doors, L.A. Woman 7″ box set
The recent Skrillex collaborators have compiled three singles from their final album with Jim Morrison, plus a fourth single of studio banter.

Bob Dylan, Can You Please Crawl Our Your Window? 7″ box set
The inscrutable one contributes four of his classic singles to Record Store Day, all in mono mixes.

Janis Joplin, The Classic LP Collection LP box set and the Move Over! 7″ vinyl box set
The iconic ’60s singer has so much vinyl on the way this Record Store Day you’ll wish your turntable were a CD changer.

Kings of Leon, The Early Vinyl LP box set
These Southern rockers package early albums Youth & Young Manhood, Aha Shake Heartbreak, and Because of the Times along with a fourth LP of unreleased studio and live tracks chosen by the band.

Nirvana, Nevermind — The Singles 10″ box set
On the 20th anniversary of Nirvana’s breakout album, own all four singles from the record: “Smells Like Teen Spirit,” “Come as You Are,” “Lithium,” and “In Bloom,” plus B-sides.

Rolling Stones, “No Spare Parts” 7″
The Stones’ contribution to Record Store Day is a previously unreleased bonus track from the upcoming Some Girls expanded editions.

Soundgarden, Live on I-5 — Before the Doors Soundcheck EP 10″
In 1996, Soundgarden were on top of the world, and this record compiles five soundcheck performances from their tour — including a cover of the Doors’ “Waiting for the Sun.” Also available: Chris Cornell’s new solo album, Songbook.

Various Artists, the Sundazed 7″ reissues
The Sundazed label is reissuing a handful of classic ’60s singles by the Byrds, the Lovin’ Spoonful, and the Yardbirds.

Wilco, Speak Into the Rose 10″
Liked The Whole Love? This release offers four alternate tracks, two of which are previously unreleased.