How the Black Keys Found Their ‘Lonely Boy’ Dancing Dude 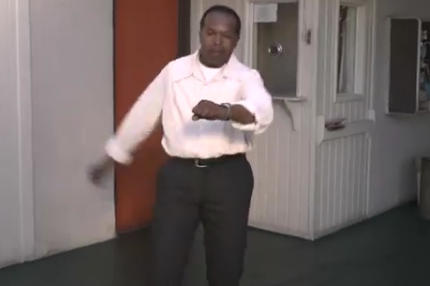 Earlier this week, the Black Keys unveiled the video for “Lonely Boy,” the hip-shaking first single from the Ohio blues-rock duo’s upcoming seventh studio album El Camino. The lo-fi clip shows nothing except for a solitary man dancing enthusiastically outside a motel room, but as of Friday morning, it has already piled up more than 600,000 YouTube views. And it almost never came to be, reports MTV News, who tracked down the video’s grooving sensation, a 48-year-old actor, musician, and part-time security guard named Derrick T. Tuggle. (How long until “Teach me how to Tuggle!” clips hit the web?)

The “Lonely Boy” leading man got his whole lip-syncing, sleeve-unrolling, fist-pumping routine down in a single take, but that he starred in the video at all was a surprise, Tuggle told MTV. “I was cast as an extra, and there were maybe six or seven other people who were supposedly going to be in the video… It was a motel shot where the guys from the Black Keys come and give me the keys to their motel room.” But once the director noticed Tuggle grooving on the set, he asked if he could actually perform on command. Tuggle jumped at the opportunity, borrowing moves from a host of iconic dancers: “John Travolta from Saturday Night Fever and Pulp Fiction, the Carlton Banks dance from The Fresh Prince and a little bit of Michael Jackson, so it was a smorgasbord of everybody in there.”

“Lonely Boy” is out digitally now and arrives on a limited edition 12″ on November 25 for the Black Friday edition of Record Store Day. The B-side will be “Run Right Back,” another track from the Black Keys’ Danger Mouse-produced follow-up to last year’s Brothers. El Camino is due out on December 6, and if you need to buy a van, the Black Keys could still have one available.