On Thursday, the staunchly independent post-punk band will start opening its vault of more than 800 shows 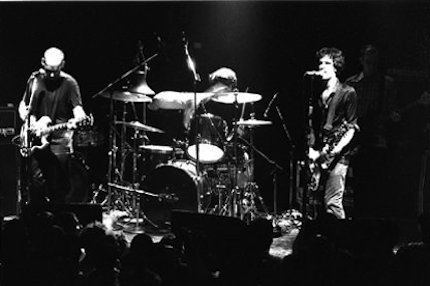 Fugazi’s obsessive focus is the stuff of do-it-yourself music legend. Led by Dischord Records founder Ian MacKaye, formerly of hugely influential Washington, D.C., hardcore band Minor Threat, the taut, dub-inflected post-punk outfit kept its admission prices low — and, somewhat more controversially, its crowds safe for those who’d prefer not to mosh — from 1987 until an indefinite hiatus that began at the end of 2002. A similar compulsive drive, it turns out, led the band to amass a cache of its own live shows on a scale more typical of jam bands like the Grateful Dead or Phish.

On Thursday, Dischord will put online the first batch from a hoard of more than 800 live Fugazi performances the band taped over the years, the New York Times reports, picking up on a story that was first reported in April. “As with a lot of collections, once we had a couple hundred tapes, we just continued to amass them,” MacKaye is quoted as saying about the Fugazi Live Series. “Why stop? We’d already gotten this far.”

The same question could be asked of Fugazi, who released their last album together, The Argument, way back in 2001. In a recent interview with the Onion’s A.V. Club, Fugazi bass player Joe Lally hinted at a possible reunion, calling the band’s swan song “a great record that we should try and top.” We wait (and wait and wait)…

Don’t jet without reading Andrew Beaujon’s incredible history of Dischord Records from SPIN’s May 2003 issue, “Out of Step With the World”: