In the first half of 2022, vinyl sales in the U.S. increased by 22%, according to the RIAA’s mid-year music revenue report. Vinyl shipments also rose by nearly 16%, with 21.8 million slabs of wax sent to retail—a marked increase of 3% from 2021.

As a result, each New Release Friday brings a ton of factory-sealed albums for the discerning music fan. With that in mind, we’ve compiled some of the most interesting titles to recently hit the racks at your favorite local spot, along with one or two gems available in the very near future. 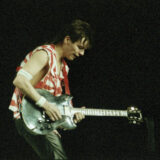 Having recently wrapped a 30th anniversary tour, Alice In Chains have reintroduced a new generation of rock fans to their finest LP. Pressed on double vinyl, the newly remastered Dirt arrives just in time, as the doom-blues dirge of highlights like “Rain When I Die,” “Dam That River,” and “Rooster” offers a newfound clarity, punching up the power of Dave Jerden’s steely production.

A Tribe Called Quest‘s lyrical MVP passed away on March 22, 2016, to the heartbreak of the entire hip-hop universe. Released digitally on the sixth anniversary of his death, Phife Dawg‘s long-anticipated second solo LP, Forever—a tour de force of beats, rhymes, and friendship—finally comes out on vinyl in November. With guest spots from Busta Rhymes, Q-Tip (singing on the emotional “Dear Dilla (Reprise)”), De La Soul’s Posdnuos and Maseo, Redman, and Little Brother, among others, this album deserves to live forever off the Internet and on our turntables.

Rhino is releasing a vinyl reissue of Shabooh Shoobah, INXS’ breakthrough third LP, in conjunction with the album’s digital 40th anniversary campaign. No, the physical set doesn’t have the five bonus tracks of its digital counterpart. But the limited-edition release was pressed on ultra-clear vinyl, adding a touch of symmetry to the Australian band’s critical creative transition, as they moved from Gothic ska to something closer to their sound on future classics like Kick and Welcome To Wherever You Are.

“One, two, three…Repeater!” Just imagine how much more powerful that line will sound when you spin the latest pressing of Fugazi‘s first proper LP on blue vinyl. Mind. Blown.

Saxophone spiritualist Pharoah Sanders was two and a half weeks away from his 82nd birthday when he was called up to the sky, leaving behind a legacy of soulful, twisted brass brilliance that levitates listeners to a higher consciousness. Originally released in 1987 and reissued by the Music On Vinyl imprint, this stirring tribute to Sanders’ mentor John Coltrane highlights the late reedist’s supremacy beyond his Impulse! albums, working alongside an expert quartet rounded out by pianist John Hicks, bassist Curtis Lundy, and mighty drummer Idris Muhammad.

I recently found the original Atlantic Records pressing at a garage sale in my town. But you don’t need such kismet to score your own copy of this glam metal essential, thanks to Friday Music’s 35th anniversary reissue of Pride on double turquoise wax. Vito Bratta is such a monster on guitar.

The Sugarcubes – Life’s Too Good (One Little Independent)

For those of you who think Bjork’s latest album, Fossora, is too much of a mushroom trip, revert your eyes to the Sugarcubes’ classic debut LP, Life’s Too Good, recently reissued on vinyl via the singer’s own One Little Independent imprint. This limited run is a new way to experience one of 1988’s coolest records.

Hungry for Stink found L7 at their loudest and most relentless, out-stomping their male counterparts with ripping cuts like “Andres,” “Fuel My Fire,” and “Freak Magnet.” The 1994 LP, the group’s last with bassist Jennifer Finch until 2019’s Scatter The Rats, sounds so much heavier than you remember on bloodshot vinyl.

Originally released in 1997, Duran Duran’s oft-overlooked ninth album finally gets its due with this 25th anniversary edition of the dark, surly Medazzaland. It’s the first vinyl edition of the band’s guitar-heavy outlier—limited-edition, 180-gram neon pink at that.

This fall marked 30 years of ABBA Gold, a project that—with the help of U2 covering “Dancing Queen” on the ZOO TV: Outside Broadcast Tour—brought renewed interest in the Swedish pop superstars during the grunge era. UMe marked the anniversary by reusing the 19-track compilation on a two-LP picture disc and a golden cassette—items as lavish as the music they house.

Originally released on double CD in 2009, this deluxe edition of the best Beastie Boys album arrived on quadruple vinyl in 2022, just in time for its 30th anniversary on April 21st. Included in this limited-edition box are such beloved B-sides as “So What’cha Want” (Soul Assassins remix); “The Skills To Pay The Bills”; and Mike D’s hilarious ode to May-December romance, “Boomin’ Granny.”

All products on this list were selected by the SPIN editorial team. However, we may earn an affiliate commission if you purchase an item through one of these links.