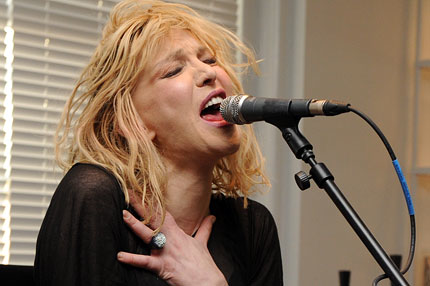 A campaign is underway pitting Nirvana’s “Smells Like Teen Spirit” whoever wins The X Factor for Britain’s coveted “Christmas No. 1″ single. But what if U.K. music fans didn’t have to choose? That seemingly far-fetched idea moved one step closer to the realm of the somewhat-plausible on November 24, when Courtney Love offered up a Nirvana song to the U.K. TV talent show.

In a tweet to The X Factor producer Simon Cowell, the Hole frontwoman appeared to suggest her late husband Kurt Cobain’s songs as material for Janet Devlin, a contestant on the show. Love wrote: “@SimonCowell you want some Nirvana songs? @JanetJealousy is from same town as Kurt? I have the perfect idea for that, call me babe.” (Cobain’s ancestry traces back to a village in Ireland near Devlin’s hometown, according to Digitalspy.co.uk.)

Don’t hold your breath. London tabloid The Sun reports that The X Factor’s producers were “stunned” by Love’s offer, given not only the usual difficulty of clearing songs for the show but also Love’s notoriously tight rein over Nirvana’s songs, which she has controlled since Cobain’s tragic 1994 suicide. And Love doesn’t look to be letting The X Factor pick and choose from Nirvana’s hits: In a tweet on November 26, she singled out Nevermind’s “In Bloom,” a song that could be interpreted as taking aim at casual listeners such as those in a TV show audience. She wrote: “@JanetJealousy @simoncowell i know it when i see it, but id want to have a hand in it, in bloom is the song, nothing else.”

The Twitter exchange comes after a pair of recent Love rants involving her Nirvana income. After lambasting former Nirvana drummer (and current Foo Fighters frontman) Dave Grohl during a Hole set earlier this month in Brazil, she doubled down during a post-show interview: “I own Nirvana with my daughter [Frances Bean]. Because of tax reasons I have to give that money to my sister, Kim Cobain, and [Kurt’s mother] Wendy Cobain. Dave makes five million a show … why the fuck, then, does he have a Nirvana Inc. credit card and I don’t?” Hey, Simon Cowell seems like a pretty successful music businessman — maybe she should ask him? Before something like this happens again.