The Muppets’ ‘Teen Spirit’ Will Easily Top These 5 Nirvana Covers 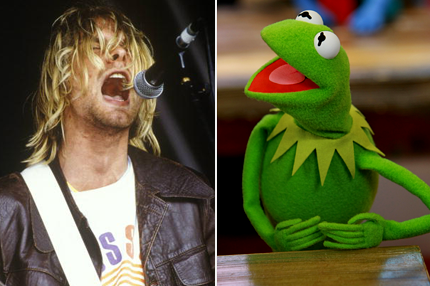 The 20th anniversary celebrations for Nirvana’s Nevermind, do not have to end just yet: the Muppets are covering the seminal album’s mega-hit single “Smells Like Teen Spirit” on the soundtrack for their eponymous new movie, set to hit theaters on November 23. ?Yaaaaaaayyyyyyy!!!.

But, remember, this is a very difficult thing to do tastefully, even with a cameo from Dave Grohl, who is backing the adorably fuzzy Muppets Barbershop Quartet on drums (replacing regular drummer Animal, who, as part of the film’s plot, is out attending anger management courses).

So, in honor of the Muppets’ upcoming cover of the angst cornerstone, SPIN picked five other covers that it’s certain to best. Sorry about that, Miley Cyrus! Watch below…

MILEY CYRUS:
The teen-pop princess headbanged through “Teen Spirit” during a gig in Lima, Peru, to a crowd of kids probably not even born when the song was released in 1991. Also, in reference to the lyrics: Yes, Miley, you should feel stupid. And, yes, while watching your performance, it’s contagious.

PAUL ANKA:
On his 2005 album Rock Swings, the Canadian crooner a once a teen-pop idol himself in the 1950s gives the world a swinging, big band version of the Nirvana classic (horns! hand drums?), which the world certainly didn’t ask for or deserve. It’s just painfully uncomfortable for everyone when a septuagenarian starts crooning about his “libido,” too. Also: That tan!

BRUNO MARS:
It’s doubtful that Kurt Cobain intended for “Smells Like Teen Spirit” to be performed with a hype man. But, hey, put your hands in the air, people. Oh, and Bruno, stick to covering one classic song at a time, dude.

MOULIN ROUGE!:
We love Ewan McGregor and practically any absinthe-chugging French bohemian, but, damn, this is just sad. The music leans toward rap-metal (yeah… remember 2001?) and director Baz Luhrmann turns the song into a grotesque burlesque, hosted by the inexplicable screeching of Oscar winner Jim Broadbent.

CASEY ABRAMS ON AMERICAN IDOL:
There’s a reason this 20-year-old Californian was eventually eliminated from Idol, and this cringe-worthy, horrendously over-the-top rendition probably had something to do with it.