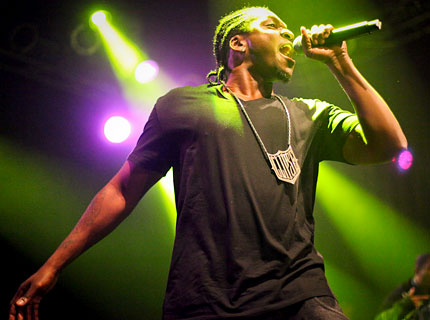 Woooooo! Ric Flair’s hip-hop takeover continues. It’s been more than three years since a blogger for rap magazine XXL posted an extensive comparison between the larger-than-life wrestler and the larger-than-life hip-hop world— and the Nature Boy’s influence only appears to grow. Back then most of the similarities were fashion-related, whether in Ghostface’s robes or Pastor Troy’s belt— though Young Dro’s I Am Legend mixtape did boast of a “Benz Coupe same color Ric Flair hair.” Cam’ron and and Vado named a mixtape cut after the wrestler a couple of years ago, and Killer Mike samples the rapper directly on “Ric Flair,” one of the best tracks from one of 2011’s better hip-hop albums.

Pusha T’s “What Dreams Are Made Of,” titled after a classic Ric Flair speech, is the latest case point, the latest taste of Pusha’s upcoming Fear of God II: Let Us Pray EP, the sequel to a mixtape offered up for free earlier this year. “Dreams” opens with Flair in high rant mode, then gets straight into some take-no-prisoners rapping from Pusha. Here, the Clipse member brags and threatens, talks cocaine and talks sex, all over pulsing strings, chopped-up vocals, a thundering midtempo beat, and plenty of air horns. The result is a promising preview of the EP, out November 8 on Decon Records and Kanye West’s G.O.O.D. Music. — despite a few troublesome lines. As much as we love Pusha’s delivery, we can’t exactly co-sign “Nothing match the feeling of pulling up in that new toy / And it ain’t even half of my safe, tucked like a Jew boy.”Download the track here, via Pusha-T. Read about Billy Corgan’s foray into wrestling here. And watch more Flair below.