The New York glamour girl sings the hook on one of two new Rick Ross tracks from his December album 'God Forgives, I Don't.' 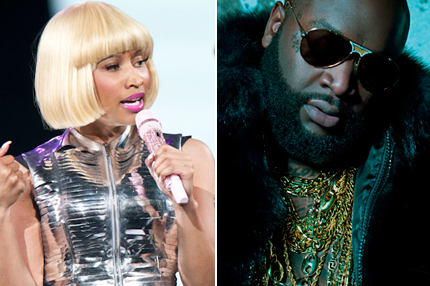 Rick Ross premiered two new tracks Tuesday night on New York radio station Hot 97 – including one with a prominent guest vocal by Nicki Minaj – as the Miami rapper readies his new album God Forgives, I Don’t for a December 13 release. Hear them below, via Nah Right.

On “You the Boss,” Minaj sings the auto-tuned hook over a mellow R&B thump and airy synths, as the usually gruff Ross shows off his (um, relatively) tender side. On “I Love My Bitches,” Ross rhymes over chipmunk-soul production by Just Blaze, the multiplatinum hip-hop producer (Jay-Z, Eminem, Jay Electronica) who is reportedly preparing an EP of electronic dance music for indie label Fool’s Gold Records.

While on Hot 97, Ross talked to Funkmaster Flex about his upcoming album, his disputes with YouTube hitmaker Kreayshawn and drug-rap motivator Young Jeezy, and the artists signed to his own Maybach Music Group imprint, among other topics. Nah Right has the audio.

Hear It: Rick Ross (feat. Nicki Minaj), “You the Boss”

Hear It: Rick Ross, “I Love My Bitches”