The band's frontman on overcoming personal tragedy, joining a church choir, and returning to music. 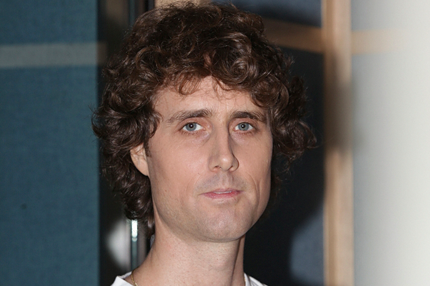 New York City’s influential dance-punk outfit the Rapture will end a five-year hiatus on September 6 with the release of their fourth album, In the Grace of Your Love. It’s a capstone to a particularly emotional period for Luke Jenner, the band’s 36-year-old frontman, who overcame personal tragedy, his mother’s suicide, and felt great joy, the birth of his son, on the way to reuniting his band and crafting their most ambitious LP yet.

We talked with Jenner, who lives in Park Slope, Brooklyn, about the new record and his road to redemption.

Welcome back, Luke…. How did the band’s five-year break help?
“It helped me realize that my life is not just music. The Rapture fell apart during the second record, but we toured anyway. I came home in a heap. I had a kid and my mom committed suicide within months of each other. It split me in half.”

That sounds difficult to handle…
“I had some reflecting to do that I was forced to confront when I came home, like, ‘How do I do this dad thing? What’s that all about? How do I handle my relationship with my wife now that there’s this kid here?’ I needed to stop running away from the stuff that I had never been able to deal with growing up. It was painful, but I realized that my kid doesn’t give a shit if I’m in SPIN Magazine. He’s not interested if I’m playing in front of thousands of people. He just wants to know that I love him and that was really healthy — I was able to see who I really am, too.”

How did your insights affect In the Grace of Your Love?
“This is the first album that I’ve been able to listen to comfortably. While I might be expressing some kind of pain, this record actually feels resolved for me. The album’s theme is being comfortable with myself and learning about letting go of a lot of hurt and resentment. It’s a transformative record for me. I’ve always felt that art has the power to be transformative.”

What did producer Philippe Zdar [of French electro group Cassius] bring to the album?
“There’s a warmth to this record that wasn’t there previously. Also, Philippe wanted us to make everything longer. He’s a big Prince fan and there’s some Prince song – I’m not a huge Prince fan, so I couldn’t tell you which -but as it ends the song sounds like it’s starting again, and then it fades out and finished. He had this idea, like, ‘Keep the song going!’ He’s a great editor, too. He’d say, ‘That song, that is the direction that we’re going in. This is what’s good about your band.'”

Those must be great words to hear…
“That’s what I think a producer’s job is: To tell you what’s good about you, because as an artist, you don’t know. You live in a fantasy world and you think everything’s great. It’s helpful to hear, ‘That’s not awesome, dude.’ Or, ‘This song is way more awesome than you think it is.’ It’s really important to have a producer that you trust.”

During the hiatus you attended church regularly and sang in its choir.
“It helped me to move through some of my fear and some of my feelings. I felt that if I learned how to pray or meditate, that it would help me. But I had no idea how to do that. So I went to the nearest place and was like, ‘I don’t know how to do this.’ I had tried everything else, like therapy and other ways of managing these feelings. I felt that I needed to try something else. Going to church and praying with other people – there’s something powerful about that.”

Does the choir influence the album?
“Yeah. I got really into gospel and its big, uplifting vocals. That’s what I’m trying to do on ‘How Deep Is Your Love’ or ‘Come Back to Me,’ or even ‘In the Grace of Your Love’ – it’s my interpretation of gospel music. Some of those songs are prayers, literally. The subject matter is bigger than myself and trying to communicate with that universe, or whatever you want to call it: God. Being in the church choir was really cool — I got involved with some cool music.”

Anything specific?
“One of the first gospel artists that really hit me was Clara Ward. She has a voice similar to my range. She was Aretha Franklin’s hero and who she was trying to emulate. I also really like this guy Claude Jeter. He put some really cool records out.”

Other influences on the record?
I’m a serious music nerd. I also got into the bluegrass and country aspects of gospel – the Louvin Brothers and Elvis’ gospel music. There’s a really great Louvin Brothers record called The Family Who Prays…. The lineage is really cool. The Beatles were really into the Everly Brothers and the Everly Brothers were really into the Louvin Brothers. The mistake most bands make is not going back far enough. They’ll be influenced by something, but stop there. I really love Otis Redding and Al Green, but for me it’s really important to go back to figure out what they were into. Otherwise, you come up with something shallow that doesn’t sound very unique.”

Do you think fans will be surprised?
“Honestly, the more time that passes the less interested I am in what people think. That’s the gift of getting older and taking those five years off. With the last record I was super engaged in the results.”

And now you’re not?
“I want it to be successful. But with our last album I was super jealous of other people. It was, ‘Oh, why are Franz Ferdinand on the cover of this magazine? Why are the Klaxons really popular in the U.K.? ‘ But that’s not why I started playing music. It’s really seductive when you start reading about yourself online or in a magazine, or you see yourself on TV. But it’s also really confusing. You start to think that maybe I am that person. Yes, I am genuinely happy when somebody says, ‘I really like your record, man.’ That’s great. I’m not saying I don’t care if people like it. But the only peace that I’ve had in life is from focusing on the process. Any time I start to focus on the result, I’m miserable, even if I achieve what I’m trying to get. It’s never enough.”

“How Deep Is Your Love” is the first single…
“Yep. It came together in the studio. It wasn’t really working at first — the rhythm wasn’t working. We couldn’t find the missing piece. Philippe got in the room with us and then we added a part at the end. I wanted a piano part all the way through the song, and the other guys were like, ‘No, that sucks.’ But Philippe was like, ‘No, totally do that. Follow your instincts.'”

Tell me about “Blue Bird”…
“It’s dealing with the death of my mom. I had songs pouring out of me at the time and it started off as an acoustic demo. When your mom takes her own life, it’s a big blow. You don’t have a choice whether you love your mom or not, no matter what that person does to you or anybody else. That song is specifically dealing through that pain in some way.”

Do other songs deal with her death?
“‘Children.’ It’s about my mom looking down on me from wherever she is. It’s about her being proud of me, if she’s out there. I think all children want their parents to be proud of them. My mom couldn’t be here for this record, so that song is me imagining what she would say if she were here.”

What about “Rollercoaster?”
“These songs are like diary entries. ‘Roller Coast’ is about keeping my marriage together. It’s our 10th wedding anniversary on August 25, and we’ve been through a lot. My wife’s an incredible, very patient person. I’m on a rollercoaster being in a band — it’s record and then, ‘Bye! See you in three months!’ We’re getting a lot better at navigating those obstacles. ‘Rollercoaster’ is almost like the Beatles song ‘Oh Darlin’.’ It’s saying, ‘Please stay with me. I wouldn’t be happy if you weren’t here.’ It’s a declaration of love, but it’s also acknowledging that I don’t have control over other people loving me or not.”

What’s your process for writing?
“I’ve always enjoyed the less self-conscious side of songwriting. You know, very impressionistic lyrics and things that are direct, the Robert Smith or John Lennon school of songwriting, where I’m just going to come at you with some really direct feeling. For me, it’s about chasing feelings. I’m not really interested in words as words. An album is words and music-and that’s a lot more dangerous. If you just read some lyrics on a piece of paper, they just don’t hold up-a lot of times, a simple phrase can be ridiculously powerful in context.”

Now that you’re a married father living in Brooklyn, do you ever get out to clubs and dance?
“Never. I work at the food co-op, go to the gym, and walk around the neighborhood and talk to my neighbors. Then I pick up my kid from school and cook dinner. I did start making money as a DJ. We’d make some trips-South America quite a few times, the U.S. and Canada. But I literally never go out.

Have you ever considered trying a totally different style of music?
Not really. I’m 36 years old, so at this point in my life I’m making peace with my past so I can just draw from everything that’s an expression of me. You know, I don’t go to hardcore punk shows anymore, but I’m still influenced by that. Sometimes people ask me if I have guilty pleasures, and I don’t any more. I’m old enough to say, ‘Who cares what somebody thinks.’ While I’m not going out dancing at clubs anymore, I did that for years. It’s still there. It doesn’t take much to wake that up in me. I love dance music just as much as I love rock’n’roll, and I don’t see much of a distinction.”

Between rock and dance music?
Yeah. In the history of songwriting, melodies have been the same for hundreds of years. It’s just the beat that changes. I found out that the New Order song ‘Blue Monday’ started as a really dirty acoustic ballad, but then they turned it into the ‘Blue Monday’ we all know. I’ve always been attracted by what you can do with melody. If you have a strong enough vocal melody, you can do anything. Dance music is just another option to serve the song. The Rapture invented this sound, so I guess I’m stuck here forever.”