The Tennessee band were making their first appearance after cutting short their U.S. tour over frontman Caleb Followill's "vocal issues and exhaustion." 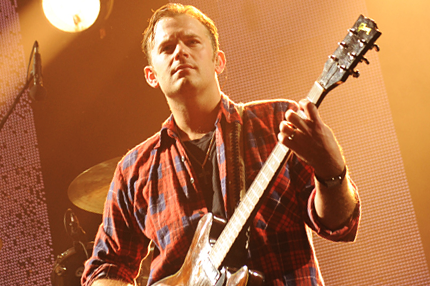 Kings of Leon returned to the stage last night for the first time since cutting short their entire U.S. tour over the summer. Performing in front of a reportedly full house at Rogers Arena in Vancouver, BC, the Tennessee rockers appeared to be back in playing form once again. Via YouTube user alyssakbosard, watch video clips of the performance below.

The last Kings concert was was in Dallas, TX, on July 29, when frontman Caleb Followhill looked unfit to the perform and the band ended the show abruptly. Kings then cancelled their entire U.S. tour, citing frontman Caleb Followill’s “vocal issues and exhaustion.” Meanwhile, a Twitter post by guitarist Jared Followill after the Dallas gig suggested deeper troubles: “There are internal sicknesses & problems that have needed to be addressed. No words…There are problems in our band bigger than not drinking enough Gatorade.”

More recently, Jared Followill crashed his car into his neighbor’s garage, though as it turned out, Followill told his told Twitter followers he’d bought the house just weeks earlier.

The Kings’ return to the stage last night in Vancouver was free of any tabloid-fueling drama, though, according to a reviewer for the Vancouver Sun. What the show reportedly lacked in surprises or chatter from the stage, it made up for in tightness and stadium-ready anthems, including “Use Somebody” and “Sex on Fire,” both from 2008’s multi-platinum Only by the Night.

Jared Followill enthused about last night’s show on Twitter. “The Kings are back in business,” he said. “Business is good. Really good. Vancouver got me all warm and fuzzy.”

In another post on Twitter, drummer Nathan Followill offered similar exuberance. “Wow Vancouver,” he said. “What an amazing crowd. Thanks 4 the love. Felt so good 2 be back on stage. Golfing tomorrow 2 work off this adrenaline.”

Marc Hogan
Tags: kings of leon, We Were There