The band ends trek due to Caleb Followill's "vocal issues and exhaustion." 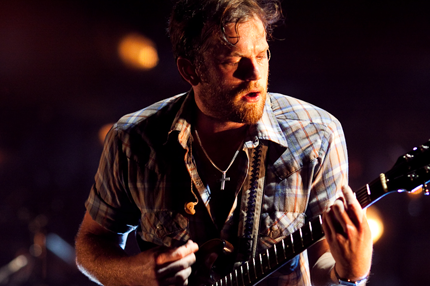 Kings of Leon have cancelled their entire U.S. tour, citing frontman Caleb Followill’s “vocal issues and exhaustion” in a statement. The news follows the Kings’ aborted performance in Dallas, TX, on July 29, during which frontman Followill appeared unfit to perform.

In a statement, the band’s camp said “[they are] devastated, but in order to give their fans the shows they deserve, they need to take a break.” All ticket purchases will be refunded, and the band is planning to resume touring in Vancouver, BC, on September 28.

While the official line cites “vocal issues and exhaustion” as a reason for the cancellation, the band members’ individual accounts have suggested a darker scenario (although in YouTube footage from the show, which is posted below, Caleb repeatedly said, “I’m not drunk, I’m just fuckin’ hot… about the fall down here because I’m so fuckin’ hot).

Following the show cancellation, Jared Followill posted on Twitter: “There are internal sicknesses & problems that have needed to be addressed. No words…There are problems in our band bigger than not drinking enough Gatorade.”