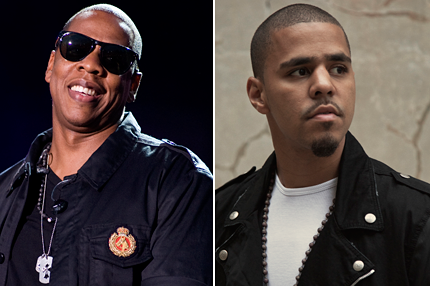 Jay-Z has been all about collaborations lately. First he teamed up with Kanye West for their chart-topping album Watch the Throne; then came news at the MTV Video Music Awards that he and Beyoncé were expecting a baby. Now Jay has added a supremely scornful verse to a new track by North Carolina rapper J. Cole, who previously appeared on Hova’s own 2009 LP, The Blueprint 3. Hear it here, via Consequence of Sound.

“Mr. Nice Watch,” from Cole’s long-delayed debut album, is dubstep-tinged electro-rap built around a pun on expensive male wrist jewelery: “If we ever go broke, then time is all we got,” Cole sings on the chorus, his plainspoken half-croon more T.I. than, say, Drake. Jay balances the track with some needed arrogance, giving his Roc Nation signee a breathless, foul-mouthed verse with some fittingly Southern references to college football. “No Mr. Nice Guy, hello Mr. Nice Watch,” Jay exhorts, paraphrasing Cole.

Cole’s Cole World: The Sideline Story, due out September 27 via Roc Nation/Columbia, has been in the works for some time. After getting the nod to rap on Hova’s own “A Star Is Born,” Cole landed on SPIN’s list of albums that matter most — for the winter of 2010-11 — for his then-untitled debut LP. Check out SPIN’s review of J. Cole’s 2010 mixtape Friday Night Lights.