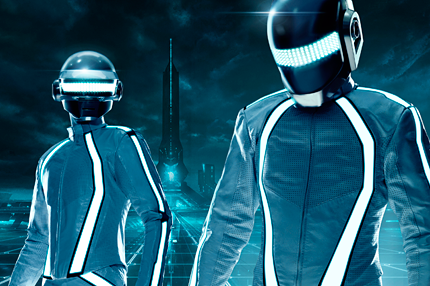 In 1995, Daft Punk brought forth “Da Funk,” the pounding instrumental single that would help catapult the French electronic dance duo across the Atlantic — with a little help from a Spike Jonze-directed video. But a year earlier, the masked pair of Guy-Manuel de Homem-Christo and Thomas Bangalter recorded “Drive,” a previously unreleased track that’s out today as part of the Soma Records 20 Years compilation LP. Hear it here.

Premiered on BBC Radio on Friday, the track offers an intriguing glimpse at the origins of an act that has gone on to headline festivals, score high-profile films, and influence a whole new generation of electronic music-makers. No relation to the music-savvy movie of the same name that hit theaters last week, it’s a buzzing, pounding track.

Soma Records is a Scottish techno label that put out the first couple of Daft Punk singles, along with releases by many other electronic artists, from Ewan Pearson to Alex Smoke. The 20 Years compilation is a triple-disc release, with one disc of back-catalogue tracks, one disc that’s a DJ mix of back-catalog remixes, and one disc that’s a DJ mix by Glasgow house duo Silicone Soul.

Daft Punk’s members aren’t resting on their robotic laurels. Resident Advisor points out that Daft Punk’s Thomas Bangalter has directed a teaser film for fashion label Co’s spring 2012 season. Starring French actress Elodie Bouchez, the film takes place in Morocco, and you can watch it below.

What’s more, there may be new Daft Punk collaborations on the way with songwriter Paul Williams, who wrote the Carpenters’ “We’ve Only Just Begun,” among other hits. Pitchfork points out numerous reports where Williams says he’s working with the duo.

As SPIN reports in the October cover story, Daft Punk’s 2006 Coachella performance was a game-changer for electronic dance music in America. “Not only did they prove that live electronic music could be captivating, but they set a new standard for spectacle,” the story explains. “Virtually every main-stage headliner — Deadmau5, Wolfgang Gartner, Plastikman, the Glitch Mob — has since tried to assemble a flashier light rig that ups the ante in an audio-visual arms race.”