EXCLUSIVE: CSS & MEN Remix Each Other

Hear CSS's take on "Rip Off" and MEN's remix of "City Grrrl" from their exclusive split 7-inch single, available on their upcoming tour. 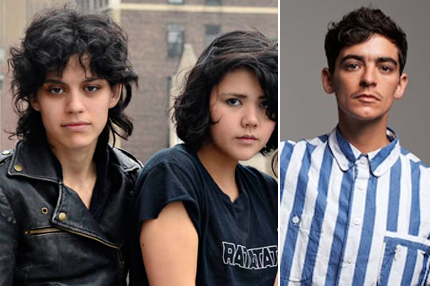 Brazilian dance rockers CSS and JD Samson’s electro-pop act MEN will team up for a North American tour that kicks off next week, but their high-energy collaboration will extend beyond the stage. At each gig, fans will have a chance to buy an exclusive 7-inch vinyl single called We Are Friends, on which CSS remix MEN on one side, and vice-versa. Listen to the results here.

CSS energize “Rip Off,” from MEN’s debut Talk About Body, with noise-punk bite, filling every inch of the original’s spareness with fuzzed-out guitar jabs and relentless rock drums. The song’s lyrics are about the creative process of making music, which appealed to CSS. “‘Rip Off’ is a very close-to-the-heart song because it’s about songwriting and producing, and gives away a lot of how MEN exists and creates,” Luiza Sá tells SPIN. “But even with all that info, what really remains is good music you wanna listen and dance to.”

MEN, meanwhile, sculpt the pulsing club track “City Grrrl,” from La Liberación, into an electro-funk groove, swapping pounding synth stabs for subtle keyboard strokes that spotlight vocalist Lovefoxxx’s feisty flow about big-city swagger. “We were super excited to remix ‘City Grrrl’ because the song represents the coming of age of a freaker [i.e., someone who doesn’t fit the societal norm], and we strongly identify with that sentiment,” Samson says.

CSS loved Samson’s interpretation. “MEN totally hit it on the head and made a very dance floor bright version of ‘City Grrrl’ that feels like something Parkey Posey’s Mary, from the movie Party Girl, would have to vogue to,” Sá says.

To complete the vinyl package, MEN and CSS each designed album art. CSS’ Lovefoxxx captured the ferocity of “City Grrrl” with a meticulous, fine-point portrait of a snarling jungle cat chomping down on a misty skyline that would look great tacked to the fridge of her São Paolo apartment. Samson’s understated art riffed on the “Rip Off” hook — “Orange juice, orange juice, is the center of the world” — with a Crayola-and-Sharpie sketch of an OJ carton.

Snag a copy of the split single by catching CSS and MEN live this fall:

Bono During His ‘Woman of the Year’ Acceptance Speech: “It’s Ridiculous for Me to Be Here”