Stream the Brazilian dance rockers' third album one week before it hits stores! 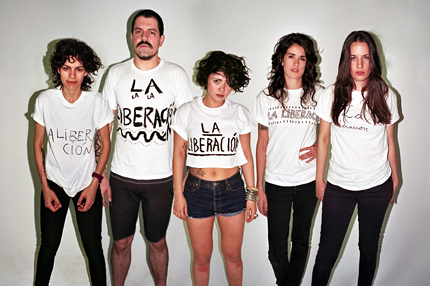 Brazilian dance rock quintet CSS arrived on the global scene in 2006 with a handful of playful jams and seemingly boundless onstage energy. It’s reassuring to know that they’ve lost none of that spirit on their third album, La Liberacion, which hits stores August 23. Experience it for yourself: the entire album is streaming here exclusively.

From the first single “Hits Me Like a Rock,” featuring guest vocals from Primal Scream’s Bobby Gillespie, to the bouncy, Talking Heads pop of “Echo of Love,” to the avant-piano pop of “Partners in Crime,” to the gleefully spazzy finale “Fuck Everything,” CSS show no fear, recording whatever suited their collective mood.

“We just wanted to be over the top,” singer Lovefoxxx tells SPIN. “We would be very exuberant [in the studio] and not think of how to do it live. This was the only rule that we had.”

One of the most spirited numbers is “Hits Me Like a Rock,” with its bouncy synth hook and its permanently catchy opening cascade of oh-oh-ohs: “The song lyrics are about when you get so hooked on a song for a long time, and then when you listen to it again, years later, it really hits you and you feel everything again, like it just happened yesterday,” says Lovefoxxx.

Then there’s the plucky title track. “[Multi-instrumentalist] Adriano [Cintra] really likes punk rock bands from Argentina, and I think that he was really excited about having a punk rock song in Spanish,” Lovefoxxx says of “La Liberacion.” “And then he sent it to us, because he was playing around in the studio by himself, we all really liked it. I love singing that song live.”

CSS head out on a North American tour Oct. 1 in Vancouver — visit their Facebook page for details.