At Home with CSS’s Lovefoxxx

The ringleader for the Brazilian party starters takes us inside her SÃƒÂ£o Paolo living room. 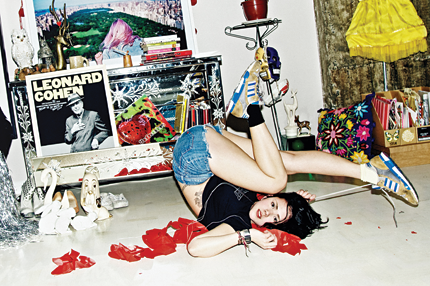 When you talk to Lovefoxxx, the effusive singer for Brazilian dance rockers CSS, you’d never expect her to be shy, ever. But she had to loosen up a bit when SPIN’s cameras came to her São Paolo apartment for a visit, to capture photos and video for our “In My Room” series. “I’m not used to having so many people in my house,” the frontwoman, 27, tells SPIN.

But, as you can see below, Lovefoxxx got super excited when showing off her favorite things, from a rainbow jumpsuit designed by Peggy Noland to the mirrored donkey statue that she designed for the cover of her band’s second album, Donkey, to signed items from the Breeders and Joan Jett. “The thing I hate the most,” she says, “is generic anything. This is something I will never, ever do.” And the contents of her living room brought that philosophy to bear.

On the musical front, the hyperkinetic band’s eclectic third album, La Liberación (V2/Coop USA/Downtown), finds their signature synth jams splattered with colorful streaks of reggae, flamenco, and folky guitar strumming. It’s a frilly sound, but don’t call it frivolous. “People say we are a fun band and kind of silly,” says the singer. “Even though silly and fun songs are pretty personal to me.”