The Replacements & Guns N' Roses bassist on finicky frontmen, and why he doesn't drive. 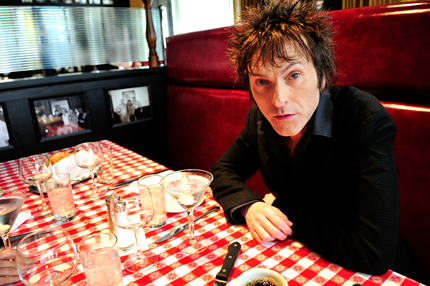 As a founding member of the Replacements at age 12 and the bassist and musical director in Guns N’ Roses since 1998, Tommy Stinson can lay claim to what may be rock’s most bipolar CV. But he’s not just a sideman — Stinson’s new album, One Man Mutiny (Done to Death), which arrives seven years after his solo debut, is a homespun collection of crystalline guitar pop and confessional balladry. “I’ve got a lot going on in my head musically,” says Stinson, 44. “Between all the bands and my own stuff, there’s a ton of shit happening in there.” He called from a tour stop in Michigan to discuss Axl Rose, Paul Westerberg, and his youthful kleptomania.

We did the math: You spent about the same amount of time making Chinese Democracy as you did playing in the Replacements.
It was probably longer, sadly. If we got the ‘Mats back together, it wouldn’t be that much ?different than Guns. Just kidding.

Has playing with different kinds of bands over the years impacted your own music?
More than anything, it keeps me being me. Because what I do in Guns N’ Roses isn’t necessarily who I am. I’m not a heavy rock guy, any more than I am a singer-songwriter type of guy like Paul was with the ?Replacements. I’ve always wanted to try to do a little bit of everything.

Your late brother [Replacements’ guitarist] Bob taught you to play music because you were getting in trouble. Was that what ended your juvenile delinquency?
The third and last time I got arrested was ’cause I’d stolen a bunch of bikes. I had to go to court. My mom had to take a day off of work. My grandmother came, too. The judge comes out into the hallway and says, “Mrs. Stinson, I gotta tell you: I’ve seen this kid too much. I’m inclined to send him away to reform school. Otherwise, he’s just gonna keep showing up here and be a pain in my ass.” As he’s saying this, I’m sitting there watching my mom and my grandmother just fucking bawl their eyes out. I felt like the worst person on the planet. To this day, I remember how they looked. I remember how bad I felt. It was horrible.

And so you started learning bass?
Bobby would bribe me to play with Cokes and candy bars. I think it finally clicked for me after our first gig. It was like, “So, there’s girls involved in this?!” All right, you don’t have to buy me off with candy bars anymore.

When was the last time you talked to Paul Westerberg? I called him about five hours ago and left a message. I was gonna tell him I just played the Taste of Chicago [festival] with Soul Asylum — which is the last place the ?Replacements played, 20 years ago. This show had a little less fanfare to it. No one broke up, no one lost a limb.

What’s the weirdest thing you two ever did together?
One night we were in L.A., staying at the Hyatt on Sunset Boulevard. As a dare, we told this cab driver we’d give him a hundred bucks to drive us backwards all the way to Small’s, which was a bar on Gower and Melrose. He actually did it! He went down Sunset, crossed down Fountain, the entire way in reverse. ?I don’t know how we didn’t get pulled over by the cops, but it was funny ?as shit.

Speaking of which, is it true you’ve never driven a car before?
It’s true, I don’t drive. But I’ve gotten behind the wheel a couple times. One year at Christmas my sister was cooking and made me drive to the store. “Tommy, go get some butter.” Of course, it’s the dead of winter in Minnesota, and there’s snow and ice everywhere. I actually spun out. That was pretty fucking scary.

When you joined Guns N’ Roses, was Axl aware of your background?
?He knew about the Replacements. ?He told me that he and [GNR tour manager] Del James had come to see us in some club, and they were not impressed. He and I both had a chuckle about the fact he wasn’t a ‘Mats fan and I wasn’t a Guns fan.

You’ve worked closely with Axl for a long time now. What’s the secret?
You figure out after a while what battles are worth fighting for. That’s the big thing. A lot of times, whether it’s Axl or Paul or just about anyone, they’ll tell you they want to hear ?what you have to say, but they really don’t. So you’ve got to walk a fine line. You have to play the moment for what it is.

Who has the wilder backstage scene: indie- or hard-rock bands?
Back in the day we were all young and imbibing, getting our cocktail on. Like with R.E.M. and X, we got hammered with those guys pretty good. But with Guns, I’ve played with Metallica. Lars Ulrich vomiting in your dressing room, that’s pretty nasty. Him taking one shot more than he should have, then having Sebastian Bach singing, “Exit Lars! Exit Laaaaars!” as his assistant is carrying him out of the building. But that’s a whole other story.