Watch Anthony Kiedis and Co.'s first video for their comeback album 'I'm With You.' 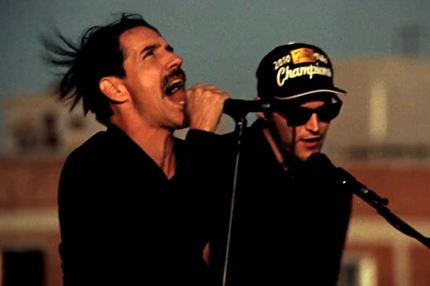 The Red Hot Chili Peppers return on August 30 with I’m With You, their first album in five years, and now the boys’ video for lead single “The Adventures of Rain Dance Maggie” has premiered. Check it out here.

Director Marc Klasfeld — who’s worked with Foo Fighters, Against Me!, Kelis and more — helms a clip that perfectly matches the song’s simple pop-funk vibe: he captures the boys rocking out on a rooftop near the shores of Venice Beach, CA — on July 30 at 6:33 PM to be exact. While the crowd looks psyched to watch their heroes in an unconventional setting, RCHP look pretty pumped, too: Kiedis and Flea bop around the stage with the energy of 20-year-olds. Obviously, they’re shirtless.

Kiedis revealed to MTV that “Rain Dance Maggie” almost didn’t come together as a single. “[The first version] was kind of mostly instrumental, about an hour song,” he says. “Flea brought it in as a very specific exercise to write a classic bass line. He woke up, had his tea, and sat down: ‘I’m going to write a classic bass line. You can’t stop me.’ Played his bass line until he felt it was cooked into a classic, brought it to us and said, ‘This is Classic Number One.'”