Preview the rapper's upcoming MTV show with a smoking rendition of "6 Foot, 7 Foot." 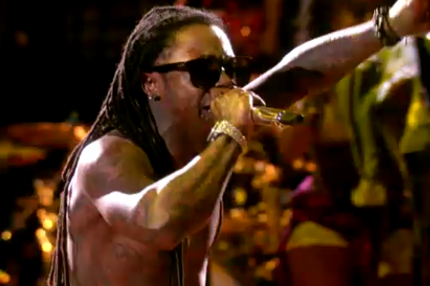 If L.L. Cool J can do it, why can’t Weezy? Lil Wayne is set to appear on MTV’s recently revived franchise Unplugged this weekend, making him one of the few hip-hop artists to appear on the classic show. The network is previewing his performance with footage of Weezy doing his single “6 Foot, 7 Foot,” which you can watch here.

The biggest shocker: Wayne’s performance is anything but unplugged. He’s backed by a full band, including electric guitarist, bassist, keyboardist, and turntablist. And where classic episodes of the show normally find artists performing on stripped-back stage set-ups, Wayne brings a full-scale production, complete with dizzying strobe lights and an illuminated catwalk.

Semantics aside, Weezy’s performance is definitely hot – the crowd erupts into a frenzy once Wayne cues up the track’s “Banana Boat (Day-O)” sample – and an appearance by his protégé Cory Gunz proves the dude can hold the stage on his own.