WATCH: The Odd Future leader plays a creepy stalker in the clip for "She," featuring Frank Ocean. 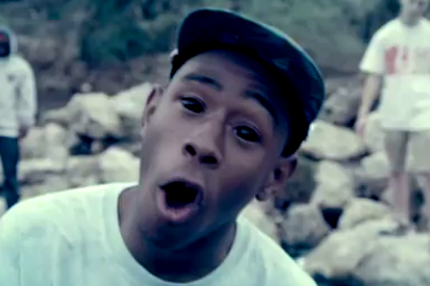 Tyler, the Creator, the madcap leader of L.A. rap collective Odd Future, introduced himself to the world by eating a cockroach, puking, and mock-hanging himself in his video for “Yonkers.” So what’s his visual take on a love song? Well, it involves wearing a creepy mask and breaking into a girl’s bedroom while she sleeps to smell her underwear. So romantic!

Directed by Tyler under his pseudonym Wolf Haley, the video for “She,” an R&B-tinged track from Tyler’s solo debut Goblin — which debuted at No. 5 on the charts in May — is simultaneously sick and silly. The clip is made to look like a family TV sitcom, starring a cute new girl on the block. But the police are looking for the Goblin, who, played by Tyler, is stalking her at night.

Over the tender guest crooning of Odd Future’s Frank Ocean, Tyler spits lyrics that are equally bi-polar: “Gorgeous, baby you’re gorgeous / I just wanna drag you’re lifeless body to the forest / And fornicate with it but that’s because I’m in love with you…”

Yikes. Sara Quin of Tegan & Sara probably won’t like this one either.