Perry Farrell and Co. team up with 'Robot Chicken' creators for "End to the Lies" clip, from their first new album in five years. 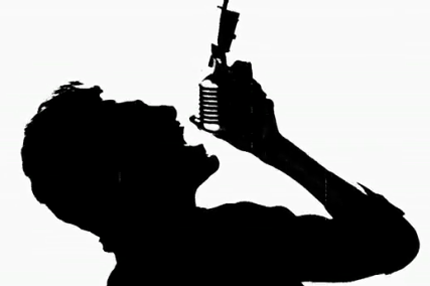 As they gear up for the September release of their fourth album The Great Escape Artist – their first in five years – Jane’s Addiction have released a video for their hot comeback single “End to the Lies” – a visually-arresting, graphic-novel-inspired, sort-of-NSFW clip, which you can watch here.

ShadowMachine Films, the masterminds behind Cartoon Network’s Robot Chicken, produced the video, and the team turns singer Perry Farrell, guitarist Dave Navarro, and drummer Stephen Perkins into black-and-white drawings that wouldn’t be out of place in a Frank Miller comic. (Sadly, Dave Sitek, who’s featured on Jane’s new album, doesn’t appear.) Still, ShadowMachine adds an extra dose of heat by using a woman’s naked body as a tableau for animation images of trees, butterflies, and rats.