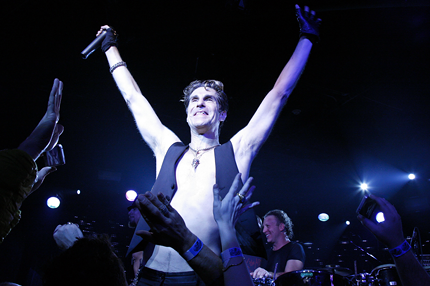 As Perry Farrell prepares to bring his Lollapalooza festival to Chile this weekend, he offered a special treat for his South American fans: new music from Jane’s Addiction. The singer hit up a radio station in Santiago, Chile, Wednesday to debut the heavy new single “End to the Lies,” which you can hear here (via Consequence of Sound).

For their summer album The Great Escape Artist – their first since 2003’s Strays – Perry Farrell and Co. hired an unlikely member for bass and production duties: TV on the Radio’s Dave Sitek, who was brought on to replace Duff McKagan. You can hear Sitek’s trademark grimy, quas-industrial production values all over “End to the Lies,” with distorted squalls of electric guitar, fat-bottomed bass riffs, and massive, arena-ready drums.

Hear It: Jane’s Addiction’s “End to the Lies”

SPIN spoke with Perry Farrell in February, and he revealed that the bandmembers have been sending each other digital pieces of songs instead of holing up in a studio for a marathon recording session. “We are writing like how a modern band would write,” Farrell said. “We have options now to make music through technology and we’re taking advantage of it; we’re not afraid of it. But we’re not just slapping loops together. We’re true musicians. We’re using technology for ideas and some of those ideas remain in the song.”

As for the final result, Farrell promised something mind-blowing and weird: “We’re producing a really amazing piece of art, an amazing piece of music. It will make people say, ‘This is strangely beautiful.'”