The indie punks show the Garden State is more than just The Sopranos and garbage dumps in clip for "No Future Part Three." 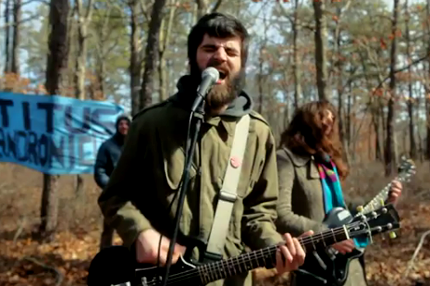 Like Bruce Springsteen and the Gaslight Anthem, Titus Andronicus are fiercely proud of their New Jersey roots and the group has filmed a new video that pays tribute to their beloved Garden State. They’ve asked fellow Jerseyites to take part by premiering the video, and although SPIN calls the Empire State home, we’re going to post it anyway.

As frontman Patrick Stickles says in the introduction to the clip, for “No Future Part Three: Escape From the Future” (off The Monitor, No. 15 on SPIN’s Best Albums of 2010 list), Jersey is more than just The Sopranos, the Turnpike, garbage dumps, the Meadowlands, and The Real Housewives and the clip attempts to reveal what the state is “really all about.”

Evidently, that means putting on an impromptu concert in the Pine Barrens, throwing a raucous basement party that no doubt violates all sorts of fire codes and, of course, hitting the road for a joyride along one of the state’s many scenic highways.