The Brooklyn rockers drop sci-fi visuals in video for romantic ballad "Will Do." 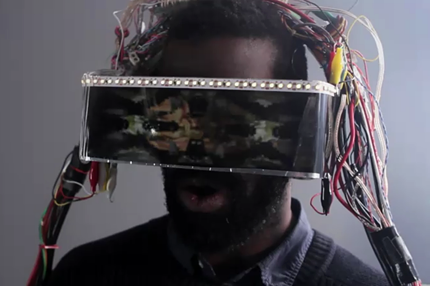 TV on the Radio’s “Will Do” – the lead single from the forthcoming Nine Types of Light – is one of the prettiest romantic ballads the group has ever recorded, and now the Brooklyn art-rockers have released a video to go along with it, although it’s not exactly what you’d call warm-and-fuzzy.

In the clip, directed by Dugan O’Neal, TVOTR go retro by sporting virtual reality gear that looks like it was leftover from a CES Tradeshow in 1995. The plot, which finds Adebimpe yearning for a lost lover, is somewhat similar to Leonardo DiCaprio’s search to reconnect with his children in Inception, but there are loads of nifty sci-effects that make “Will Do” worth a repeat viewing or two.

Kevin O'Donnell
Tags: the wire, TV on the Radio, Videos