"This band is four geezers all on the same page, wanting to make this the greatest band in the world," the ex-Oasis man says. 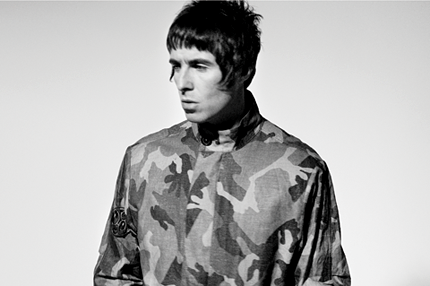 In August it’ll be 20 years since Gallagher and his brother Noel first took the stage as Oasis. It’ll be almost two since they broke up backstage in Paris in a shower of guitar splinters. As in a proper divorce, Noel cited Liam’s “verbal and violent intimidation.” Meanwhile, Liam, 38, took custody of guitarist Gem Archer, bassist Andy Bell (now on guitar), and drummer Chris Sharrock, renamed the group Beady Eye, and recorded Different Gear, Still Speeding (Dangerbird). Fresh from rehearsals for their inaugural tour, he swaggers into the band’s London management office wearing a green parka and a fedora from his Pretty Green clothing line. Today he had an epiphany: “Guess what, mate? I reckon I’m in the best fucking band in the world. Twice that’s happened now. Mega, isn’t it?”

When you say “knocking about,” does that mean they are actually old Oasis songs?
No way. Me and Gem always used to go to Wheeler End [Oasis’ studio in rural England] and do demos. We went through all the demos, and it was obvious which were ours and which ones were the little fella’s. How? They were the good ones.

The little fella? How is life without him?
The little fella’s gone. I watch enough Sky News to know that we shouldn’t have leaders. This band is four geezers all on the same page, wanting to make this the greatest band in the world.

Another new song, “Beatles and Stones,” pays tribute to your heroes. What did you do for John Lennon’s 70th?
I had a little drink. I didn’t make a big deal of it. I didn’t lie in bed naked or go for a fucking Japanese, if that’s what you’re on about.

“The Morning Son,” what’s that about?
It’s about Jesus. It’s about resurrection: “The morning son has rose.” But most songs are about me getting to the end of the song and thinking, “Thank fuck that’s over.” I find words really hard.

Do you feel you’ve got something to prove?
No, I’m in the top two human beings on the planet.

Who else is there?
I dunno. Could be Elvis. Could be Gandhi. Could be the street sweeper. Could be you. We all think we’re Superman from time to time. I feel like I’ve contributed. I feel like I’ve got kids off their arses. I think there’s a lot of kids out there who have got something from our music.

Let’s go back to the breakup in Paris in 2009. Say you don’t smash Noel’s guitar. Say you sort it out. If you could go back, would you?
No. Let’s nail this down: This ain’t no stopgap or side project. We’re not hanging around waiting for the little fella to come to his senses. By the time he does that, we’ll be flying.

What’s he doing?
Recording probably. I’ll check it out when the time comes. We share the same management, so I’m sure he’s had a little listen to ours. Whether he likes it or not, who cares?

What do you miss most about him?
I’m not pleased we’re not talking, but I want to do things the right way — my way, for once. Noel used to have the big vision. Sometimes he treated us like his fucking backing band. Some of the videos we did were fucking shocking. “Lyla,” for example — we look like fucking Culture Club on shit acid. This time ’round, we’re in control of the details.

What don’t you miss?
Oasis was done. Even a blind man could see it. It was: new record, do the videos, big tour, have a fight. I’m glad that routine has come to an end.

Noel had a baby in October. Didn’t you send a card?
A lot of people have kids. He’s not the first and he won’t be the last. I wished him all the best through me mam.

Your clothing label, Pretty Green, has done well. What am I going to experience wearing your gear as opposed to, say, Jay-Z’s Roca-wear?
You’re going to be fucking arrested wearing his gear and you’re going to pull a really nice-looking bird wearing mine.

So, we’ll never hear Oasis live ever again?
No. Never. I’ll miss them songs, but they are in me head. They are in my life deeply already. In my DNA. But Beady Eye can’t start banging out fucking “Live Forever,” can they? Never say never, but…no.