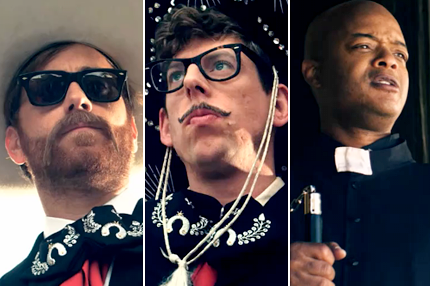 Only one of the hottest bands in rock’n’roll can bring together a Playboy model and Battlestar Galactica actress, a professional snowboarder, a Twilight star, a reformed crack addict from Diff’rent Strokes, and the dude who rips out a toilet and jumps six stories with it to crush an evildoer in The Boondock Saints. And that band is the Black Keys.

The Ohio duo tapped this oddball cast of Tricia Helfer, Shaun White, Christian Serratos, Todd Bridges, and Sean Patrick Flanery to star in their new music video for “Howlin’ For You,” off their latest album Brothers (one of 2010’s best). It’s a trailer for a Kill Bill-meets-Desperado action flick, about Alexa Wolf, “a sexy assassin with a troubled past,” played by Helfer, who “unknowingly falls in love with the man who killed her father… Now, all grown up with an appetite for revenge, Alexa’s leaving a trail of bloody corpses and broken hearts in her wake.”

It’s worth watching even if just for Bridges, who plays a priest: “I once choked a chupacabra to death with my own bare hands for not saying grace,” he says.